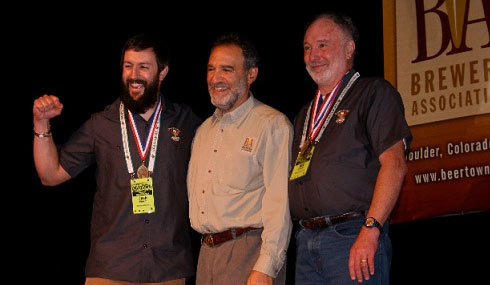 Chuckanut Brewery opened in July of 2008 in Bellingham. Now, ten years later, it is about to celebrate the big anniversary with a series of events spread out over the course of ten days. Details about those plans are below.

I am not sure if any other brewery in the modern era hit the scene with such immediate impact. The very first time Chuckanut Brewery entered its beer in the Great American Beer Festival, in 2009, it brought home four medals from the most prestigious beer judging competition in the nation, and was also named Small Brewpub of the Year. The coming years brought a whole lot more medals and honors for the young brewery. Pictured above: Chuckanut receives its first GABF medals in 2009.

The brewery’s dedication to creating authentic, top quality lagers has not only earned them praise, but has also caused other breweries to up their game. If you’re a brewery around here and you’re going to make a Pilsner, a Dunkel, a Helles, a Vienna, or a Kolsch you now know that it will be compared to Chuckanut Brewery’s beer of the same style. They set the standard and have raised the bar.

The string of anniversary events gets started on July 13th when Chuckanut Brewery releases a new version of an old beer — a beer that is legendary in Washington beer history.

(Quick history lesson. Long before Chuckanut Brewery was born, owner/brewmaster Will Kemper made beer for one of the very first craft breweries in America, Thomas Kemper Brewery. That brewery opened in 1984 and was located in Poulsbo. It eventually partnered with Pyramid and was sadly transformed into a soda pop brand.)

Back in the 80s, Thomas Kemper Brewing was widely recognized for a beer that was affectionately referred to as “blueberry beer.” Back then, it was simply know as Thomas Kemper Lager, but in actuality it was a Helles Lager brewed with a special yeast that imparted a flavor reminiscent of blueberries.

On July 13th Chuckanut Brewery releases its version of the blueberry beer. Other Anniversary events will follow. Here’s more information straight from the brewery:

Chuckanut Brewery celebrates ten years of brewing beer with its 10 Days of 10 Years of Chuckanut beginning Friday July 13 through July 22. Each day there will be a special activity to help honor each year Chuckanut Brewery has been in existence! Chuckanut Brewery’s history has been rich and heavily rewarded for brewing some of the best European style Lagers and Ales in the country. It won Small Brewpub of the Year the first time it entered the Great American Beer Festival (GABF) 2009 and Small Brewery of the Year two years later at the 2011 GABF. Chuckanut now has two breweries, the original in Bellingham with it’s full service Kitchen and its production facility in Skagit Valley with its big Beer Garden & Tap Room. The calendar of activities will happen at both North Nut (the Kitchen, 601 W Holly St, Bellingham) and South Nut (Tap Room in Skagit Valley, 11937 Higgins Airport Way, Burlington).

There’s lots of ways to help Chuckanut celebrate 10 years of brewing please come join in the fun when you can!

Chuckanut Brewery & Kitchen located at 601 West Holly St, Bellingham was awarded the National Small Brewpub/Brewer of the Year 2009 and National Small Brewery/Brewer of the Year 2011 at the Great American Beer Festival (GABF). The full service “Kitchen” serves from 11:00am every day to guests of all ages with an eclectic fresh local menu with weekend brunch starting at 9:30 am. South Nut’s Tap Room is in the heart of Skagit Valley, 11937 Higgins Airport Way, Burlington and welcomes guests of all ages. Check out additional information about Chuckanut Brewery at http://www. chuckanutbrewery.com/