Chuckanut Brewery recently announced that Chuckanut Citra Leaf Pilsner is now available in bottles across the Northwest and British Columbia. It’s a great beer that erstwhile was only available on draft. How good? IMHO, good enough that I rushed out to buy some at my neighborhood bottleshop (The Beer Junction) as soon as I heard this news. The recipe for this one makes use of a hop product called American Noble Citra, which adds some fruity, citrus notes to this Pilsner’s more-expected old-world hop character. 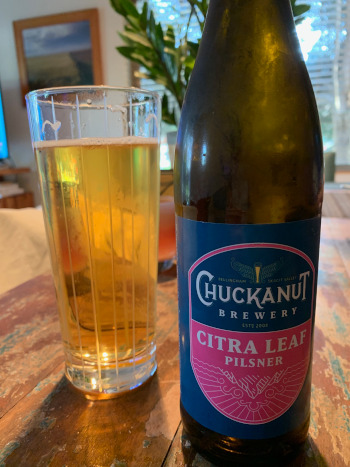 You may be familiar with Citra hops, but this is a different animal: American Noble Citra. I’ll try to make a long story short. If you don’t care about this level of beer geekery, scroll down for more info about this particular beer.

YCH Hops offers a few different versions of a product called American Noble Hops™. Among them, the Citra version. The Yakima-based company, one of the leading hop suppliers on the planet, introduced the American Noble products about 3 years ago.

I am going to introduce some words that many beer lovers probably haven’t heard before: bract, bracteole, and strig. Basically, we are talking about the hop cone’s leafy outer shell—the stuff that protects the inner lupulin glands, which is where the essential oils and resins live. Normally, the hop cones are used in their whole form. Most commonly, they are processed and transformed into pellets. All those cool new words are broken down and converted to pellet form. 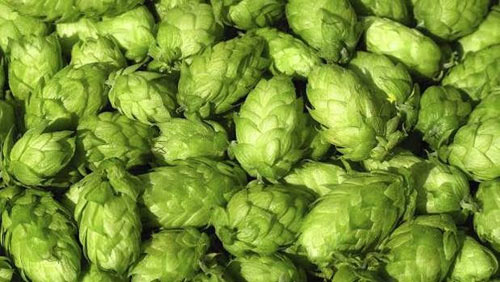 Another new term for you, Cryo Hops®, is also part of this story. It’s another fairly new product from YCH that is, for our purposes, best described as a type of hop extract or hop concentrate. When processing whole cone hops for the production of Cryo Hops, the cone is basically deconstructed to get at the resins and essential oils contained in the lupulin gland. 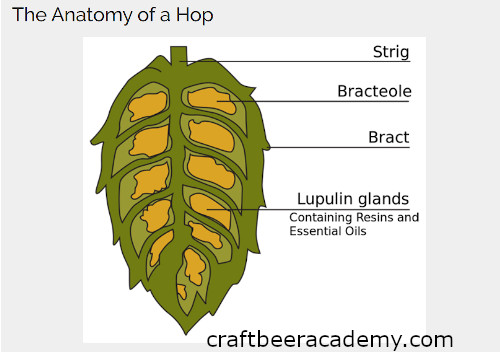 The cryogenic hop-processing technology separates whole cones into two components—the lupulin (essential oils and resins) and the bract (everything else). While the lupulin is at the heart of the matter, the bract still has plenty of aroma and flavor characteristics, so why waste it? YCH uses it to make different versions of American Noble, like Citra, Cascade, Mosaic, and Simcoe.

Because it is less lupulin-rich, American Noble ends up being a low alpha version of the hop. Simplifying things here, alpha acids are the main bittering agent in hops. For our discussion, simply think of American Noble Citra as a low-alpha version of Citra hops. Floral, aromatic, fruity, citrusy, they evoke a lot of the same adjectives as regular Citra, but they are not very bitter. Brewers who appreciate the product use terms like lower-intensity, nuanced, and delicate. Others who seek the massive punch provided by so many modern hop varieties might use words like weak, passive, or mild.

Getting back to the beer, Chuckanut Brewery created its Citra Leaf Pilsner using traditional noble hops and American Noble Citra. It is a traditional pilsner with some new world hop character. Making a pilsner with straight-up Citra hops would completely change the character and make it something fundamentally different than a traditional pilsner. Not that there’s anything wrong with that, but Chuckanut Brewery always maintains one foot firmly fixed in the old-world tradition even when they’re incorporating newfangled stuff like American Noble Citra.

Here’s more about the beer straight from Chuckanut Brewery.

For those who have experienced Chuckanut’s Citra Leaf Pilsner you are now in luck. It’s out in bottles across the Northwest and into British Columbia! This new spin our Chuckanut’s true Pilsner recipe replaces some of the classic European noble hops with a considerable amount of WA State Yakima Chief’s new American Noble Citra Leaf hops. Bright, golden, refreshing with aromas of citrus this is an aromatic and quenchable lager with the typical Chuckanut dry finish.

The American Noble Citra Leaf is only the bract (or leafy part) of the hop cone not the lupulin glands. The combination of classic old world Noble hops and new world American hop leaf melds together wonderfully to create notes of grapefruit, guava and spicy bitterness. Great with any Southeast Asian, Mexican or Indian cuisine this beer will easily put the fire out and allow you to continue to enjoy any spicy foods! Or enjoy it by itself on a hot summer day to cool you down, cheers!