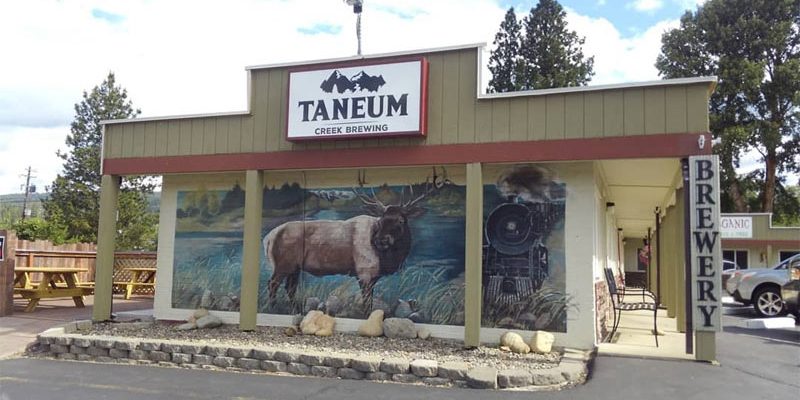 An hour east of Seattle, along Interstate 90, the town of Cle Elum, Washington is now the home of two breweries: Mule and Elk Brewing and Taneum Creek Brewing. We should note that rumors abound that Dru Bru, currently located at Snoqualmie Pass, plans to open in Cle Elum as well.

With a population of about 2,000, the main drag through downtown Cle Elum still has that small-town vibe, with lots of small, locally owned, private businesses, including a pair of pint-sized brewery tasting rooms.

Recently, the Washington Beer Posse went for a hike and came down the trail with a powerful thirst. Luckily, we returned to paved roads not too far from Cle Elum, so we stopped by Taneum Creek Brewing and Mule and Elk Brewing to quench our thirst. Sheepishly, I admit it was my first time visiting these two tasting rooms. Both are dog-friendly, neither serves food beyond bar snacks.

Mule and Elk Brewing is located in the heart of town, very near one of my favorite butcher shops: Owens Meats. Seattlelites may recognize the name: there’s an Owens Meat vending machine at Stoup Brewing. Note that this is the brewery’s new location. Their old location down the street is occupied by another brewery, but we’ll get to that in a minute. Mule and Elk’s brewery and tasting room is along the main drag but is set back from the street, so keep an eye out for the sign. (418 E 1st St #7, Cle Elum, WA 98922)

The tasting room spills out onto a patio with picnic tables and Adirondack chairs. When we visited, on a Saturday afternoon in September, there was live music outside. After tasting through a flight, I ordered a pint of the Warrior 2.0 IPA, a beer named after the local school’s mascot. Others in my group enjoyed the red ale. Lucy, the Washington Beer Dog, enjoyed the music and some shade under a picnic table.

While Mule and Elk Brewing produces its beer on-site, Taneum Creek Brewing is a bit different. The beer is brewed at a private residence three miles from the tasting room, which is located in the space that was once Mule and Elk’s tasting room. Our server told us that the five-barrel brewery has taken over a large garage. The tasting room is located just off of I-90’s Exit 85.  (811 WA-970 #7, Cle Elum, WA 98922) 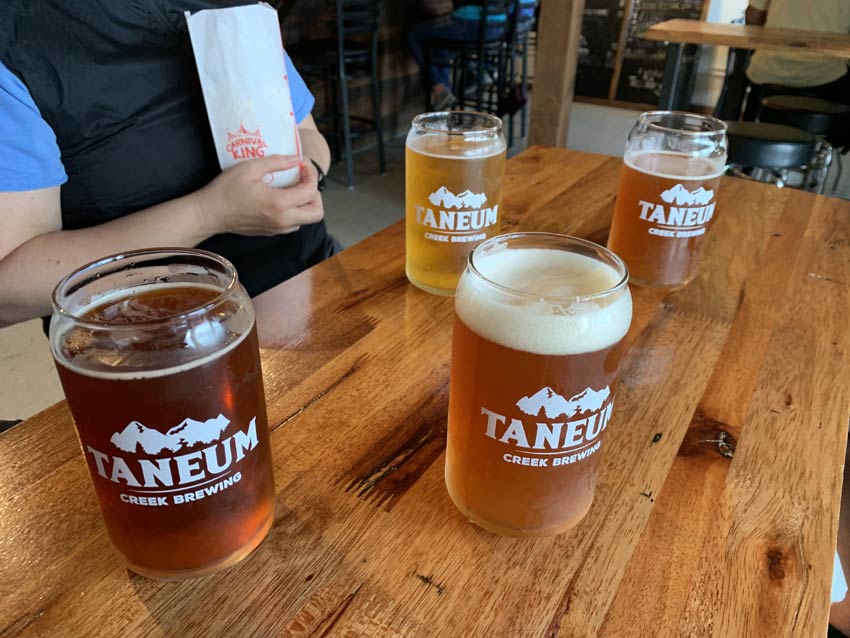 All of the beers at Taneum Creek were solid, with a couple of exceptional offerings. The Never Lift Double IPA was my top choice and suitably impressed the entire crew. Surprisingly, the Day Drinkin’ Blonde also grabbed my attention (I am not usually drawn towards blonde ales but this one had a hoppy bite). The tasting room is small, but there is also some patio seating around back. Be advised that there are railroad tracks right across the street and whenever a train passes you have the opportunity to order a beer for just $1.50. I think they were 12-ounce pours, and the beer of the day was the aforementioned blonde ale. Whatever the case, that’s good deal for a good beer.

If you’re like me, you usually find yourself whizzing past Cle Elum at least a couple times a year. Now you’ve got a reason to stop. Namely, beer.