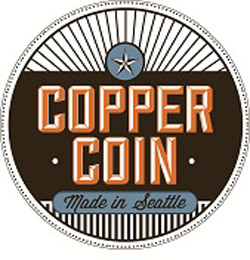 The Copper Coin in West Seattle celebrates its second anniversary this Wednesday, October 15th. In addition to some very special beers to share, they plan to offer a screaming deal on their Deluxe burger.

“We’ve quickly crept up on our 2nd birthday down at Copper Coin, and it’s time to celebrate!” Says Gregg Graham, bar manager at Copper Coin. “We’ll be saying thanks to the neighborhood for a great first two years by offering our Deluxe burger and fries for a screamin’ $4.99! I’ll also be tapping some awesome beers for the occasion, including fresh-hop IPAs from Breakside, Brickyard, and 7-Seas, two tasty pumpkin ale offerings, and a special keg of Two Beers Overhang Imperial Porter we’ve been letting condition for a year in house!”

But that’s not all. The Copper Coin also announced that they are opening a second business in West Seattle: Coastline, a craft burger and beer joint at 4444 California Avenue SW.

“This casual eatery will be serving up all-natural grass-fed beef burgers on house-baked buns, hand-cut fries, classic dipped shakes, and, of course, a fine selection of draft beers,” says Gregg.”