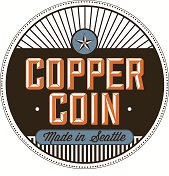 A couple months ago, I posted a story about Copper Coin, the new restaurant and bar that moved into the space previously occupied by Porterhouse in West Seattle (read it). With a rotating selection of 20 mostly local beers on tap, they certainly merit mention here on the blog. Today I have some news regarding Copper Coin. Tomorrow night (Thursday, December 13), Copper Coin will introduce its new house beer: The Coin Copper Ale.

Not long after it opened, the folks at Copper Coin contacted Joel VandenBrink, Brewmaster and owner at Two Beers Brewing Company. They were interested in having him create a house beer. A West Seattleite himself, VandenBrink was happy to oblige. “They contacted me about doing a beer, visited the brewery and described what they had in mind. They wanted something copper-colored, hoppy and slightly sweet,” said Joel VandenBrink, “I’m very happy with the way it turned out.”

VandenBrink describes the beer as being copper in color but hoppier than the typical Amber, noting that it is more reminiscent of a Pale Ale than an Amber. The hop profile includes Centennial, Chinook and Cascade hops. The beer clocks in at about 5.5 percent ABV and about 35 IBU.

On Thursday evening, the crew from Two Beers Brewing will be at Copper Coin to help celebrate the release of The Coin Copper Ale. Also, Copper Coin will offer a celebratory menu featuring Smoked Baby Back BBQ Ribs with Baked Beans and Creamy Cole Slaw. A pint of The Coin will cost you just $3.50.

Copper Coin is located in West Seattle next to the historic Admiral Theater.