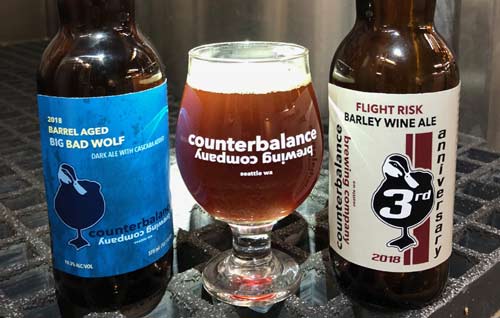 Counterbalance Brewing Company invites you to come down to the brewery this Friday and Saturday (Feb 16 and 17)  to help them celebrate their third anniversary. The occasion includes the release of some special beers. Details below.

“Celebrate three successful years at the Counterbalance taproom Friday, February 16th and Saturday, February 17th. The celebration will include the release of our third anniversary beer, Flight Risk Barley Wine, additional limited bottle releases from the cellar, food trucks and merchandise giveaways through the weekend. Initially available only at our taproom, Flight Risk is American-style barley wine with flavors of pineapple, stone fruit and caramel with a dry finish. Flight Risk Barley Wine (11% ABV) will be released both on draft and in 375 ml bottles.”

“Counterbalance Brewing Company opened its doors and launched wholesale distribution in February 2015. The brewery and taproom are located at in Seattle’s historic Georgetown neighborhood. Counterbalance beers are distributed to bars, restaurants, and retail locations throughout Washington by Vinum Importing & Distributing.”

Two easy ways to give the gift of beer this year
Good Brewing Company opens another taproom in Woodinville
Best of Hands distributing its beer in cans, today