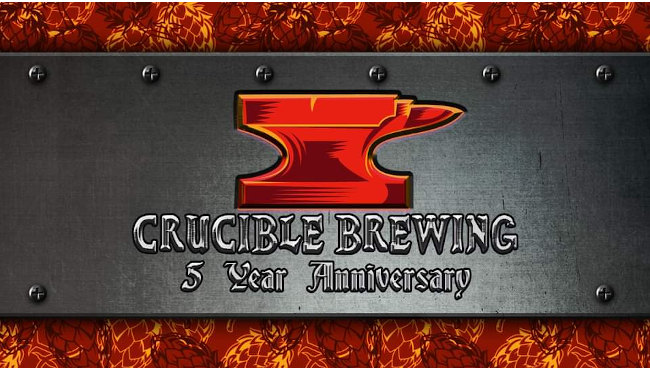 These days, I am happy to share news about things that are actually happening. I mean, as opposed to sharing news about things that are not happening, which has been all too common over the last few months. While it may look a bit different than parties in the past, Crucible Brewing is about to celebrate its 5th anniversary, and you are invited. The event takes place at the brewery and taproom in Everett on Saturday, October 3rd and they’d love to see you anytime that weekend. Or anytime at all, for that matter.

“While we ARE throwing an anniversary party, It’s MUCH smaller this year,” says Shawn Dowling, co-founder of Crucible Brewing. “I hope to see everyone that can make it, if at least briefly, on that night, over the weekend, or at the taproom again soon to help us celebrate five whole years as a brewery—though this last year, 2020, feels like five years on its own.”

They’ll follow all Phase 2 safety guidelines during the anniversary celebration, offering both indoor and outdoor space for social distancing, which they’ll encourage.

“Although we had planned a Massive Celebration for our Big Five, this year we are doing a much smaller, more low-key, anniversary celebration than previous years,” says the company via social media. “BUT that said, we are still planning to have some fun stuff for everyone to do at the Crucible Brewing’s 5 Year Anniversary Party!”

Keep an eye on the Facebook event page for updated info.