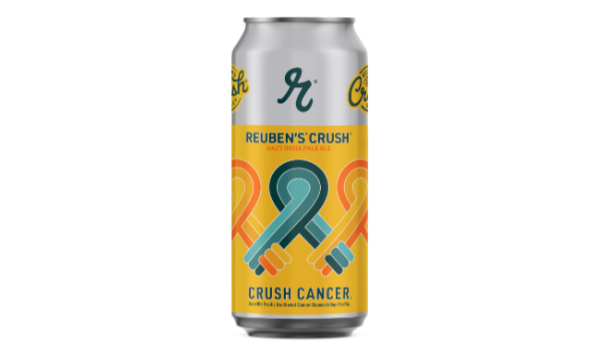 Last year, Reuben’s Brews released a beer to commemorate National Cancer Survivors’ Day, the first Sunday in June. The brewery donated a portion of the proceeds from Crush Cancer IPA to Seattle Cancer Care Alliance. Well, that went so well that they are doing it again this year.

This year’s Crush Cancer IPA, the latest beer in the brewery’s popular series of hazy IPAs, is available now at the Reuben’s Brews taproom, which is currently open as a to-go beer outlet. It will also make it into wider distribution, so look for it at local retail outlets.

The release statement from the brewery says, “Last June we debuted a special batch of our Crush Series hazy IPA called Reuben’s Crush Cancer, with a donation to a local cancer charity. Now, we’re releasing a new batch for 2020 on Tuesday June 2nd, and this batch will reach wider distribution!”

This year’s Reuben’s Crush Cancer was brewed in memory of Dean Mochizuki, a long-time brewer at Reuben’s Brews who sadly passed away from cancer earlier this year. Before Joining Reuben’s, he worked for many years at Pike Brewing.

“We had planned to brew this year’s Crush Cancer with Dean, but sadly we must brew it in his memory,” said a statement from the company.

Helping in the effort, Yakima Chief Hops and Roy Farms contributed hops to the project. A portion of proceeds from sales of Reuben’s Crush Cancer will be donated to Pacific Northwest cancer research non-profits.