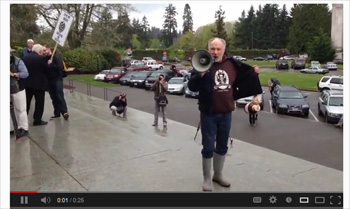 Last Friday (April 19) brewery workers and beer lovers converged on the steps of the capitol building in Olympia to demonstrate their opposition to the proposed changes to the state’s brewery excise tax. The Defend Washington Beer Rally was loud and proud. Let’s hope the message was heard. There are a few short videos below.

The rally cry of “We’re here for Washington beer and job” echoed across the capitol campus. Speakers included a number of elected officials pledging their support as well as members of the craft beer community pleading their case. Will Kemper of Chuckanut Brewery is usually a rather quiet, soft-spoken man; Friday he spoke with fire and passion, igniting the crowd. Dick Cantwell spoke in carefully chosen, powerful words. Everyone did a great job and Olympia heard a very powerful, positive message. After weeks of fretting, texting, typing, emailing, and calling, it felt good to be out there actually doing something.

Another story dominated the news cycle on Friday (manhunt in Boston). Otherwise, this might have received a lot more attention from the local media. There’s nothing we can do about that. What we can do? We can keep the pressure on our politicians and keep asking our local media to cover the issue. We can make sure our friends and family hear the whole story and really understand the impact these changes would have on a vibrant, growing industry.

Remember, this isn’t about the price of your pint. This is about the breweries you love and their ability to grow to meet the ever-increasing demand for craft beer. This tax proposal would hurt them much, much more than it would hurt you and I.

The rally took place at noon. Earlier in the day, members of the craft beer industry testified in front of the House Finance Committee. The video of their testimonies is online here.

I encourage you to get informed on this issue (see our previous posts on the topic) and keep the pressure on our legislators.

Below are a few pictures and videos from Friday’s Defend Washington Beer Rally.

Will Kemper (Chuckanut Brewery) fires up the crowd.

Dick Cantwell (Elysian Brewing) tells it like it is.