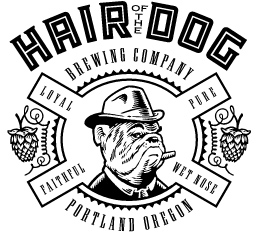 Two of Oregon’s most beloved breweries have teamed up to create a collaboration beer. Deschutes Brewery and Hair of the Dog Brewing announced today the release of a new collaboration brew. Here is the press release..

After years in the making, two Oregon breweries announce an artistic collage of cask-aging alchemy

May 7, 2012 – Bend, Oregon – It took two years, and lots of time aging in the dark and mysterious interiors of hand-selected barrels for four distinctive brews to become COLLAGE, the first beer brewed in Deschutes Brewery’s Conflux Series. The journey began with a conversation between Hair of the Dog’s Alan Sprints and Deschutes Brewery’s Gary Fish, when they set out to explore the idea of a collaboration beer unlike any other.

In the spring of 2010, four world-class beers were brewed: Deschutes Brewery’s The Stoic and The Dissident and Hair of The Dog’s Fred and Adam. These four classics continued their courtship for the next 24 months aging in a variety of cask barrels, including rye whiskey, cognac, sherry, pinot noir, bourbon, new American Oak, and new Oregon Oak.

In fact, more than 100 distinct barrel-aged rounds were sampled to identify prominent flavors and subtle nuances. Gary, Alan and the Deschutes Brewery brewmasters then began the fun and challenging task of determining the perfect blend.  In the end, Gary Fish declared, “We expected something really good.  What we got is really great.”

Fish continued, “It’s an industry where we can do things because it’s fun, because it’s interesting and intellectually stimulating.  We’re lucky we have a group of consumers that are passionate about what we’re doing.”

The result is a virtual “collage” of patience, time and collective curiosity. The final blend has so many flavors and gradations; it is unlike any other tasting experience imaginable. Alan Sprints marveled, “It was amazing how we blended all those different barrels together and you can still pick out individual characteristics from each barrel.”

A match made in craft beer heaven? We think so.

Collage will be available in extremely limited quantities in 12-ounce bottles only starting May 15th at Deschutes Brewery’s Bend & Portland brew pubs. Special beer dinners are being held in Portland at Wildwood Restaurant (May 14) and at Deschutes Brewery’s Bend Pub (May 18) to celebrate the release and provide a unique opportunity to try the component beers; visit www.deschutesbrewery.com/events for details and tickets.

About Deschutes Brewery
Located in beautiful Bend , Oregon , Deschutes Brewery is in the business of daring people to expect more from their beer. That’s why we started off in 1988, on the banks of the Deschutes River here in Bend , Oregon , by selling Black Butte Porter at a time when others were sure a dark beer would never catch on. Our brewers love to push the envelope, especially if it makes someone nervous.  But for us, the highest praise is a raised glass and a toast of “Bravely Done!”  For more information about Deschutes Brewery and its courageously crafted beers, please visit www.DeschutesBrewery.com.

About Hair of the Dog Brewing Company
Hair of the Dog Brewing Company is located in Portland , Oregon and was created to produce bottle-conditioned beers that improve with age.  The main focus is to provide the beer lover with new and unusual beer styles, and is known for its barrel aged and high alcohol beers.   Hair of the Dog is one of the world’s smallest Breweries, producing a mere 120 gallons per brew, last year’s production was about 15,000 gallons.  For more information about the brewery and our beers, check out hairofthedog.com