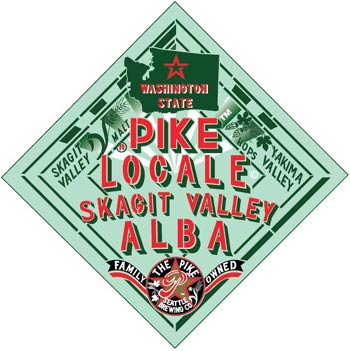 This is more than your typical new beer release. This could be the start of something really big. In fact, a lot of people in the craft brewing business think it already is. I’m talking a about craft-specific, locally produced malt varietals. Pike Brewing Company just introduced the first beer in its Locale series.

The story deserves much, much more background that I’m providing here, and I hope to tell the story in the near future, but for now take a look at this announcement from Pike Brewing about this very cool new beer and this very cool innovation in the world of craft beer.

Seattle, WA – June 1, 2015: Malt is the soul of beer; akin to grapes in wine. Brewers have an incredible diversity of hops to brew with and yet since Prohibition have been limited in malt choices. Now Pike Brewing Company is working directly with Skagit Valley farmers to grow barley varietals specifically for craft beer malt. These varietals will bring new, full and complex flavors that today’s craft beer drinkers want. We are introducing this with Pike Locale, a series of beers made with 100% Washington State ingredients that define our local terroir.

“We know that craft beer drinkers are passionate about drinking locally,” said Art Dixon, Pike Brewing Lead Brewer. “As brewers we’re excited to introduce them to all new flavors with these locally grown malts.”

Since Prohibition the barley grain supply for brewers has been dictated by macrobreweries, who prefer high protein, low flavor grains. There are over 11,000 varieties of barley and yet only a handful are used for malt today. For this beer, Pike Brewing is working with Skagit Valley Malting, a new craft maltster.  They are able to malt barley in smaller quantities, tailoring their process to the exact specifications each varietal needs to bring out its fullest flavor in craft beer.

“With Pike Locale we are reviving the pre-Prohibition tradition of sourcing quality ingredients as close to the brewery as possible,” notes Pike Brewing Founder and President, Charles Finkel. “Prohibition dealt a blow to brewers and small farmers alike. And since that time craft brewers have done an admirable job brewing delicious beers with a very limited palate of malts. Pike Locale ushers in a new chapter with these locally grown, varietal malts that will introduce beer drinkers to new flavors.”

Skagit Valley Alba’s base malt was grown by Knutzen Farms (Skagit Valley) and includes malts from Palouse Colony Farm (Whitman County), Washington Bulb Co. and Hedlin Farms (Skagit Valley). Its Cascade, Centennial and Mosaic hops come from the Yakima Valley and its honey from Salish Lodge bees in Snohomish County. It is brewed with water from the Cedar River Watershed and uses Pike #1 yeast.

Future beers in the Pike Locale series, featuring other heritage and varietal malts, will be available as the grains become available and as Pike Brewing Company’s brewers create new recipes for them.