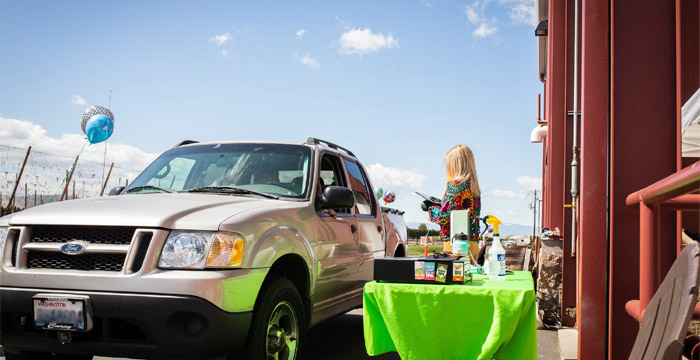 The world of beer has been adopted some new terms lately because of the pandemic shutdowns. Terms like grab-n-go growlers, hands-free purchasing, curbside pick up, and home delivery are suddenly part of the beer lover’s lexicon. Here’s one more term to add: Brewers Market, which is something akin to a farmers market, but for brewers, not farmers. As reported by The New School, this novel drive-thru concept is taking shape at Old Town Brewing in Portland.

The notion isn’t too different from what Bale Breaker Brewing has offered recently at its brewery near Yakima (pictured above), but that drive-thru only offers Bale Breaker’s own beers. Another similar operation, the Beveridge Place Pub has enabled customers to place orders and pay online, and then they deliver the order to the car as you pass through the parking lot and stop at the back door. There are a number of other similar operations, but this is the first time I’ve heard of a designated brewers market, one involving multiple breweries each offering its own beer directly. A farmers market for breweries.

According to the report on newschoolbeer.com, Old Town Brewing will begin hosting a weekly drive-thru brewers markets. Not only will they sell their own beer and pizza to go, but they’ve teamed up with other breweries to provide customers with a more-robust, one-stop beer shopping option. Participating breweries include Buoy Beer Company, Gigantic Brewing, pFriem Family Brewers, Reuben’s Brews, Reverend Nat’s Hard Cider, and Stormbreaker Brewing.

The plan is for Old Town Brewing to host the pop-up beer market in its parking lot on Saturdays. Each brewery will have its own tent to showcase its wares, similar to what you’d see at a farmers market. The experience offers customers a drive-thru, hands-free, beer buying experience. They intend to run the market through the summer.

Could such a thing happen in Washington? Right now, the state’s Liquor and Cannabis Board seems pretty amenable. Even if current laws forbid it, and I’m not sure they do, it seems anything is possible these days. Recognizing that breweries and other tax-paying alcohol producers are facing unprecedented hardships, the LCB has quickly responded and adopted changes in regulations. Breweries delivering beer, restaurants delivering bottles of booze, even pre-made cocktails to go. Credit where it’s due.

Adam Milne, the owner of Old Town Brewing, told The New School, “We wanted to create a more engaging way to not only buy local beer, but engage with the community directly. The concept of a Farmers Market was really the driving force. Where each week we will open up our parking lot to alongside other breweries, everyone will set up their booths, with the cool beer they want to sell, and create a single stop where people can come say hi and support a multitude of breweries at the same time – all from a safe and structured distance.”

For all the details, see the original post on The New School.

Toilet paper and beer, two of life's necessities come together this Saturday
Want to help brew a beer at Reuben's Brews? Here's your chance
Four Eastside breweries collaborate on All Together IPA to benefit The Plate Fund