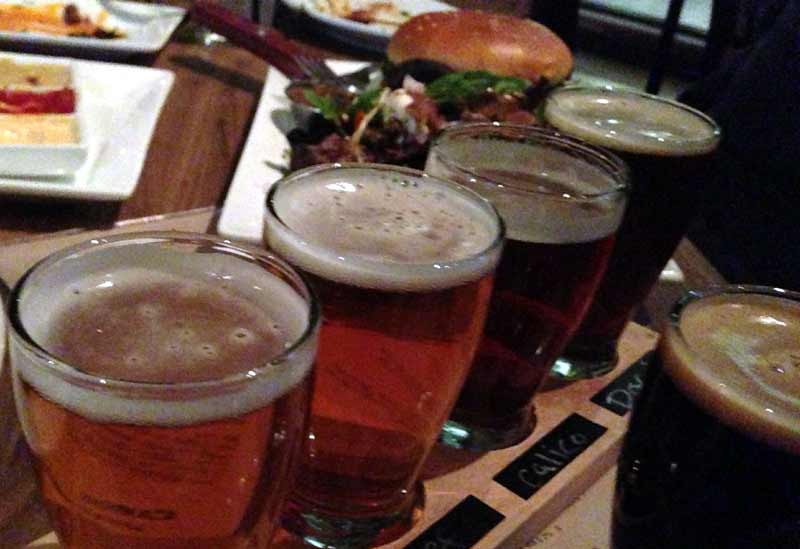 A chain of beer-focused restaurants from California recently opened a new location at University Village mall in Seattle.

It’s called Eureka and I’m telling you about it because I like it. This, the company’s first venture outside of Cali, is the eleventh Eureka restaurant. The Seattle location opened a couple months ago and offers 40 craft beers on tap with 20 of them rotating regularly.

Everyone at Eureka is a Cicerone Certified Beer Server. Seriously, you can look it up on the Cicerone.org website. Not just the managers and bartenders, but the servers and even the host that walks you to your table can speak meaningfully about beer. One would expect this to help eliminate the clueless server syndrome, which we all find so annoying.

It’s not every day that a restaurant or bar manager voluntarily tells me about the cleaning regiment for the draft system. I didn’t even ask. Literally, out of thin air, Danny Kisch, one of the managers at Eureka, decided to tell me how often they clean their beer lines—faucets, couplers, and all. He even explained how, and who is trained to do it. Refreshing transparency on this sensitive subject.

Here’s the thing, and I guess this is my point, you may choose not to like Eureka because they aint from ‘round here, but do not question their dedication to beer. My opinion, admittedly, is based on one single visit, but I was hard-pressed to find anything NOT to like about Eureka.

By their own admission, they still have a lot of information to absorb about the local beer scene, but they seem eager to learn. Since opening, they have been meeting with local breweries, going on field trips, and tasting a lot of local beer. You’ll see more local stuff on tap at Eureka before too long.

I don’t want to lose my beer focus, but let’s talk about grub. In addition to a great selection of beer, you’l 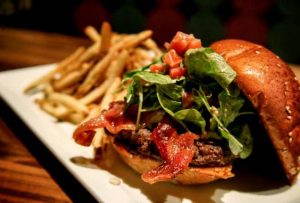 l also find a menu that features, among other things, serious hamburgers. Sure, they have other stuff, but the burgers are a point of pride for Eureka. I opted for the Fig Marmalade Burger (pictured at right), which features House-made fig marmalade, melted goat cheese, crispy bacon, and more. One of my dining partners ordered the Bison Burger with smoked mozzarella and house-made bacon-infused jalapeno jam.

Compared to some of Seattle’s beloved beer haunts, Eureka is sharp and polished, not cobbled together or done on the cheap. It is warm, casual and comfortable, but not cozy and well-worn like so many other beer joints around town. To be honest, it does not immediately look or feel like the kind of place a Seattle beer lover would expect to find such dedication to beer. There’s nothing wrong with that, it’s just the fact of the matter.

There are plenty of televisions for watching the game, a large bar with plenty of grownups-only seating, and live music on Thursday nights. Also, there is a large patio seating area which is conveniently tented and heated for the winter. All positive attributes in my book, especially when combined with a great selection of craft beer.

Before I forget, I should mention that they also feature small-batch, craft whiskey. You know, if you’re into that sort of thing. 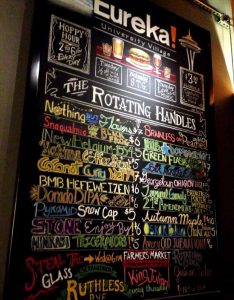 But let’s get back to the beer. Eureka regularly hosts tap takeover events, at which you can order a flight of tasters from the featured brewery. The night before I was there, Eureka hosted an event featuring a number of beers from Ballast Point Brewing. Happily, they still had some Dorado Double IPA to accompany my burger and some Sea Monster Imperial Stout to serve as my dessert.

Eureka is a nice addition to the local beer scene. It’s a bit different than most of the beer bars around town, but the world is changing and craft beer continues to find its way into the mainstream. For an establishment like this, the whole beer thing would usually be nothing but a token effort. Not at Eureka. I seems they get it. Sure, they’re foreigners, but there’s no denying they speak our language.

How it evolves over time, of course, remains to be seen. Will the service level remain so high? Will the beer selection remain so outstanding? We will see. For now, Eureka seems to be firing on all cylinders.

For the sake of disclosure, I should mention that they did buy my dinner and beers. But that’s it. Buying me a burger and a brew NEVER guarantees anything. You cannot secure my favor so easily. I only tell you that I like a restaurant or bar because I actually do like it. If every shopping mall had a Eureka, maybe I’d go shopping more often.

And as far as beer at the mall is concerned… Yes, I understand that the RAM is at U-Village, and Northgate, and so on. But this is different.