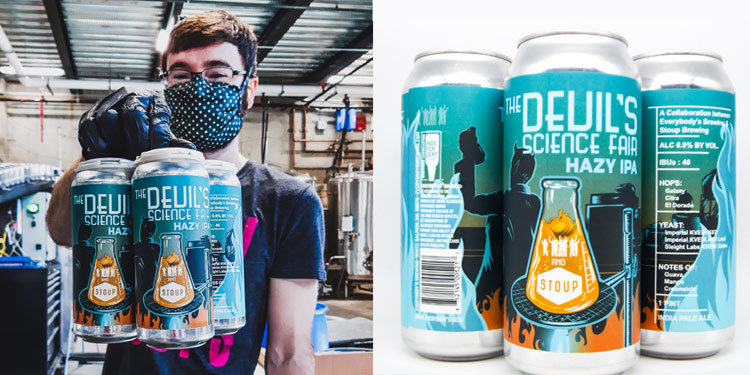 This new collaborative IPA from Everybody’s Brewing and Stoup Brewing tinkers with the usual laws of brewing science. Devil’s Science Fair IPA gets some expected tropical character from the hop profile, which features Galaxy, El Dorado, and Citra hops. No weird science there. Where things get a bit more adventurous, the brewers used a blend of three Kveik yeast strains, a higher-than-normal fermentation temperature, and a lower pitch rate. Science!

Originally hailing from the northern fringes of the European continent, Kveik yeast is a flexible little beast, and brewers often use it to push boundaries, letting it go wild and produce all kinds of interesting esters. For this beer, the brewers practiced a measured approach. Reportedly, the result is a tropical IPA that finishes bright, clean, and dry, “without any hint of stress.”

Here is the release notice from Everybody’s Brewing

Everybody’s Brewing and Stoup Brewing have just released a collaborative Hazy IPA named The Devil’s Science Fair, available in 16oz cans at local bottle shops and markets throughout Washington and Oregon. The Devil’s Science Fair comes in at 6.7% ABV and 60 IBU, and pours a vibrant, hazy gold. Tropical fruit aroma and flavor can be attributed to the blend of Galaxy, El Dorado, and Citra hops as well as a unique blend of three Kveik yeast strains sourced from Sleight Labs (Seattle) and Imperial Yeast (Portland).

Kveik strains remain an intriguing ingredient and relevant player in the craft brewing industry. They have the unusual ability of running at a range of temperatures and pitch rates that would normally destroy other yeasts. Looking to produce big, fruity esters, some brewers attempt to push towards the extreme ends of these ranges. The approach of Stoup and Everybody’s, was a carefully calculated technique that called for very high temperatures combined with a low pitch rate that gives Devil’s Science Fair it’s super clean, bright, fruity finish, without any hint of stress.

This collaboration has been a long-awaited effort between the two breweries, and a very natural alliance. Both breweries take pride in the scientific, technical approach to beer production, while still enjoying the fun, innovative side of the industry. “Stoup’s motto is, ‘The art and science of beer,’ which is right in line with our mission here,” said Everybody’s Head Brewer, Adam McClure. We jumped at the chance to work with Stoup when the idea first came up at last year’s WA Brewers Awards. Says McClure of Stoup’s owner/brewmaster Brad Benson, ”I have a ton of respect for his approach to brewing and his vision of what craft brewing means to community, plus his beers are amazing.”

Though this will be the debut of this beer in 16oz cans, a first batch was released on draft only last month. The plan was for both breweries to do a second batch, with half going into cans and the other for more draft. The Covid-19 pandemic forced them to eliminate the draft side of things, but both thought the pandemic made it even more important to keep their plans for release of the cans. “In this time of national distance, where so many have experienced loss and distress, somehow the spirit of collaboration and creation seem to endure though the passion of brewers everywhere.” Adam and Brad agree, “If the culmination of this project could be anything to anyone, we hope that it is 16 ounces of hope and joy when they need it the most.”