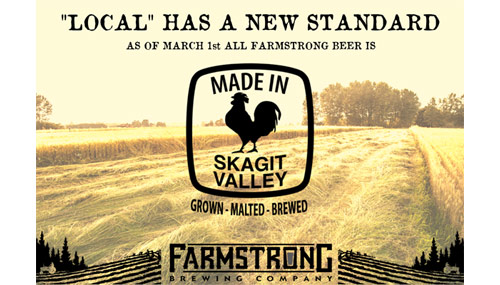 By now, most beer lovers know that farmers in the Pacific Northwest grow virtually all of the nation’s hops; however, the source of the grains used in our favorite beers is something of a mystery. Most, but not all, of the beers that we drink around here are made with barley grown in various places across North America, like Montana, Minnesota, North Dakota, Wyoming and so on. Yes, Washington farmers also grow barley, but not in enormous quantities like some other states. Wherever the barley is grown, most of it is then processed (malted) by large malting companies who sell the resulting malted barley to the nation’s breweries. (Learn about the malting process.)

A brewery doesn’t necessarily know, or care, about the origin of the barley beyond who processed and supplied it. After all, how different is two-row barley grown in Montana from two-row barley grown in Washington? Some breweries are very particular about the source and the processing of the grain, some are not. As far as consumers are concerned, it’s not really something we think about too much.

“Three years ago, Farmstrong opened its doors in Mount Vernon, Washington,” says Clay Christofferson of Farmstrong Brewing. “Within that time we’ve seen amazing growth, both in the industry we love and the place we call home. The Skagit Valley is home to not only some of the country’s most fertile farmland but also to an incredible community. Our focus has always remained on showcasing our county’s bounty and using as many local ingredients as possible. For years we’ve strived to create “truly local” beer, and while most of our creations could hold that title, we were unable to bring our two flagships under that banner… until now.”

“As of March 1, 2019, all our beer is now made from local grain,” Christofferson explains. “We’ve spent the last year working hand-in-hand with local farmers and maltsters to transfer the entirety of our recipes to Skagit Valley Malt. Every glass of Farmstrong beer now comes from grain that was grown, malted, and brewed within a 10-mile radius.”

According to Christofferson, this “estate brewing” approach allows Farmstrong to do something very uncommon in the beer industry: showcase the terroir of the land where the beer is brewed.

“Crafting award-winning beer while remaining agriculturally-independent is no longer a dream, but a reality,” he says.

Brewers have described malted barley produced by Skagit Valley Malting as intense and rich compared to the typical barley provided by the larger producers. This is not at all a bad thing, but it certainly is a consideration and it does impact the flavor of the beer, so existing recipes for familiar beers require careful reformulation.

“It’s been a lot of work but it was worth it,” says Tupper. “As a brewer, I’m excited about new challenges and this one was very important to me and the rest of the team.”

When Thane joined the team back in 2017, Farmstrong Brewing was a familiar brand based largely on the success of two beers: Cold Beer Pilsner and La Raza Ambar. The beers were popular, but they were the brewery’s only beers that did not utilize local malted barley. When the company canned and released it’s Valley Gold Lager, it was Farmstrong’s first canned beer brandishing the “Grown Here. Malted Here. Brewed Here.” slogan. At that time they decided all of their beers should live up to that mantra and have been working to bring that plan to fruition. Now they have.

“The next time you taste a Farmstrong beer, know that it’s the freshest, most “truly local” beer we can brew,” says Christofferson. “We’re proud of that, and we hope you are, too.”