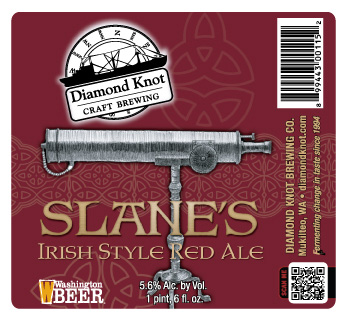 It is cold. It is raining. It is winter in the Northwest. Seasonal affective disorder is beginning to set in. But wait! There is light at the end of the tunnel! We just received our first Spring Seasonal Beer press release of 2014! Indeed, this is welcome news. It means spring is not too terribly far away. Only 36 days and 10 hour until pitchers and catchers report for Spring Training. Only 3.5 weeks until Diamond Knot Brewing  releases Slane’s Irish-Style Red.

Spring’s just around the corner, which means Slane’s Irish-Style Red is on deck

MUKILTEO, WA – This red is red hot. It’s not as sly as your neighborhood ginger, but it might just trick you into believing its season won’t end. Every year production is increased and every year the beer sells out, confirming what the Diamond Knot crew already knows: this is one hell of a great red.

Scheduled for a Feb. 1 release, Slane’s Irish-Style Red, named after a founder’s uncle, will hit the shelves and taps throughout Washington, as well as British Columbia and 11 other states, through Total Wine & More.

“We couldn’t be happier with the loyal following Slane’s is earning,” said Sherry Jennings, DK’s sales & marketing wrangler. “The beer is simply delish, and beautiful in color. As soon as I tell people it has hints of caramel, they are sold.”

Indeed, the complex malts finish with hints of caramel; however, Slane’s is crisp with subtle smokiness and hop.

“Though we actually brew Slane’s in the dead of winter, we look forward to it every year because it signals that spring is just around the corner,” said Pat Ringe, DK’s VP of Brewing Operations. “I have fond memories of an elderly couple, whose surname was Slane, coming into the Alehouse with their whole family every spring to enjoy our beer that shares their name.”

Here are the stats:

As breweries reopen their taprooms across Washington, it's all about expectations
Father's Day BBQ fundraiser at Brewmaster's Taproom
Washington Brewers Guild introduces new members of the Board of Directors