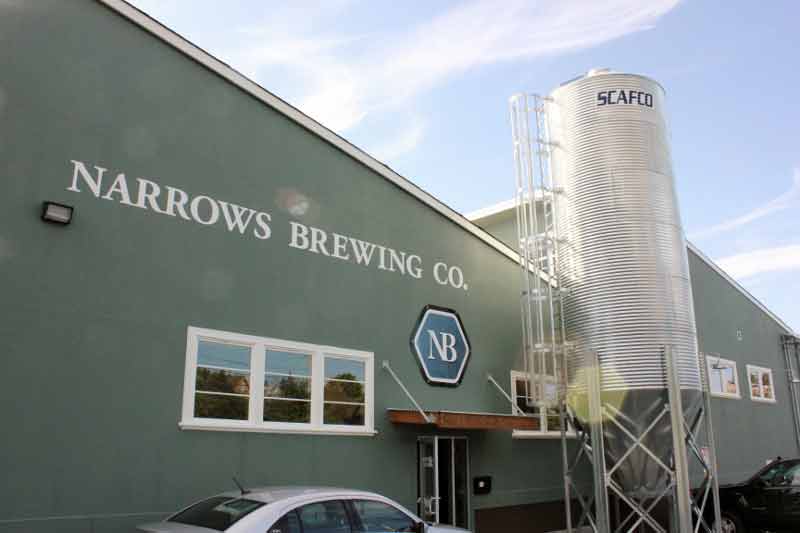 Yesterday we attended a preview event at the Narrows Brewing Company, which celebrates its grand opening this Friday, July 12 (as we reported here). We have some pictures below. Located at the Narrows Marina, the new brewery overlooks the water and offers an amazing view of the Narrows Bridge. Actually, the brewery is over the water. Narrows Brewing is part of a larger, ongoing plan to revitalize the entire marina, which includes some amazing, beautiful 100 year-old buildings.

Wooden beams and large-format pictures of the bridge’s original construction give a nod to history, but Narrows Brewing still feels very contemporary and slick. The Narrows Marina is a historic location, with a proud past and a still-important role in the South Sound, but it needs to be brought into the 21st century. The brewery is a perfect bridge to do that, so to speak.

I’m a bit jaded, having seen more than my share of breweries, and rarely do I walk through a front door and exclaim, “Holy Crap!” But that’s what I did at Narrows Brewing yesterday.

In short, the space is fantastic and the view cannot be beat. The beer was great and only promises to get better. The tasting room (more like a pub, really) doesn’t offer food, but you can order-in from Boathouse 19, the adjacent restaurant at the marina. Along with three great beers, last night they were serving sliders, shrimp and wings. They were all excellent.

Manning the 15-barrel brewhouse is Joe Walts, who formerly brewed at Ale Asylum Brewing in Madison, Wisconsin. Last night they were pouring his Pale Ale, IPA and a Golden Ale. All three were outstanding. Especially considering these were all first-batch beers on the new system. You’d never guess. Highly attenuated, dry, and a bit more potent than he’d originally intended, but all very good beers. I was particularly fond of the Pale Ale. Coming soon, expect a Stout and a Belgian-style blond ale. Beyond that, time will tell. Joe says he’s already scoped out a space in the basement for barrel-aging.

In the meantime, they need to get the doors open and start serving beer to the public. Let the beer speak for itself. I would expect the crowds to be large on opening weekend, but then again, this is one of those “everything happens at the same time” weekends. See our previous post for details about opening weekend at Narrows Brewing.

It’s super-simple to find. From Highway 16, take Exit 2B and head west on South 19th Street. Follow 19th all the way to the water, cross the railroad tracks and you’re there.