You will soon be able to get award winning beer from Flyers Brewery much closer to Interstate 5. We just learned that the company plans to open a new location near Burlington. Flyers Restaurant and Brewery is opening a second location at the Skagit Valley Regional Airport: Flyers Restaurant and Brewhouse. The new location will be a beer-focused restaurant only with no immediate plan to build a new brewery, but there’s always a possibility.

“There’s a lot of land at the Port of Skagit/Bayview Business Park for future brewery growth,” says Tony Savoy, brewer and owner, Flyers Restaurant and Brewery.

As far as a potential opening date is concerned, Tony says,”We are hoping for July. We have a small remodel, and licensing, whichever takes longer. The name will be Flyers Restaurant and Brewhouse, since there will be no brewery.”

The business park, located at the airport, is just a few minutes off of Interstate 5. See map below.  The new Flyers location is in the previous home of the Kitty Hawk Cafe. 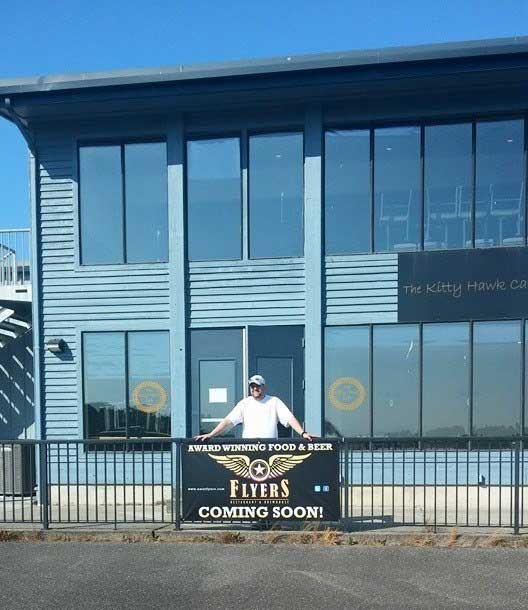 In other Skagit Valley beer news, we just learned that Skagit Valley College is working on a brewing program. Tony Savor is working with Allen Rhoades (Anacortes Brewing) and Bryan Krueger (Boundary Bay Brewery) on developing the program. As we reported recently, Central Washington University recently announced that it is now offering a four-year Bachelor of Science degree, making it the first school in the state, and one of only a handful of schools in the nation, offering such a degree.