We recently received a press release from Flying Bike Cooperative Brewery. Whatever you think of it, Flying Bike is an interesting, thought-provoking concept.

Describing itself as “Seattle’s first planned cooperative brewery,” the organization recently announced a Member Investment Campaign, inviting members to fund the next phase of growth for Flying Bike Cooperative Brewery. The goal of the campaign is to raise $300,000 through the sale of preferred stock. Flying Bike will use the funds to secure a leasehold brewery space and purchase capital equipment.

Here is the press release.

At the September 2013 Annual Meeting, the FBCB Membership, by majority approval, passed an amendment to the Articles of Incorporation to provide Members the opportunity to purchase nonvoting Preferred Stock. The goal of the Member Investment Campaign is to raise $300,000 through sales of Preferred Stock by March 31, 2014. Proceeds from the Member Investment Campaign will be used to acquire a leasehold brewery space and purchase capital equipment.

“I’ve never been more excited to be a part of Flying Bike Cooperative Brewery,” stated Ryan Vanderpol, President of the Board of Directors. “2013 was a landmark year for us and really solidified that the community supports us and believes in what we’re doing. We’ve accomplished a lot, but we’re still a long way from done. We need the membership’s help more than ever. This investment campaign will give us the capital we need to secure a lease, build a brewery and taproom, and finally make this dream a reality. I sincerely urge every member to consider contributing to this campaign and helping us get Flying Bike off the ground. This truly is Member Driven Beer!”

As a cooperative, FBCB memberowners choose board members, what beer will be brewed and what beers will be on tap, along with the general direction of the brewery. Memberowners will also receive a taproom patronage refund and other benefits. FBCB has supported many Seattle beer events including the signature Tour de Pints bike ride during Seattle Beer Week each May.

Please note that the Preferred Shares are only available to members who live in Washington State. 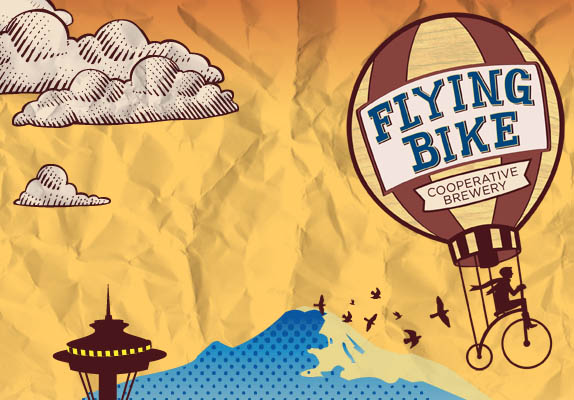