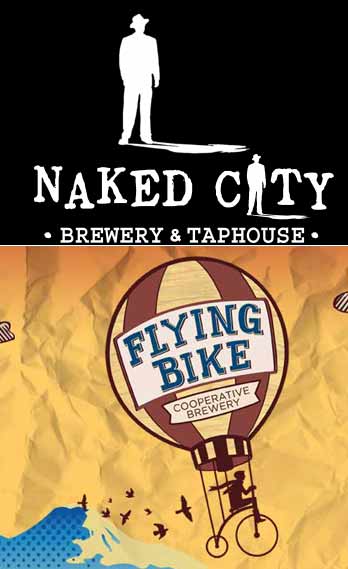 Have you visited the taproom at Flying Bike Cooperative Brewery yet? Well, Flying Bike and Naked City Brewing are right next door to each other. The two breweries are separated by a small parking lot, making collaborative brewing remarkably easy. In fact, the proximity of the two breweries enables beer to be brewed in one location and fermented in the other. So that’s what they did. It’s a level of collabeeration you don’t hear about every day.

Wednesday, September 30th, at their respective taprooms, the two breweries will simultaneously tap into the first collaboration beer: Brewmance Golden Ale.  The event page is here.

Brewmantically involved neighbors, Don Webb of Naked City and Kevin Forhan of Flying Bike, brewed the beer at Flying Bike and then fermented it at Naked City. To make it happen, they spanned the parking lot using the Wort Line of Friendship, aka a series of brewery hoses clamped together, with a symbolic golden tri-clamp in the middle. This facilitated the knock out—the process of moving the wort from the brew kettle to the fermenter, to put it in simplified terms. Another way to look at it, Flying Bike was the hot side and Naked City was the cold side.

The beer was brewed using 100% Skagit Valley Malt: malted barley produced by Skagit Valley Malting and Brewing Company in Mount Vernon. Don’t know what that is? Check out the story here. This “collabeeration” was made possible with the assistance of Big Time Brewing Company, which presumably provided some of the hoses. As you can see in the video below, the Wort Line of Friendship is pretty long.

“It was truly a historical (or hysterical) day as we mashed in and boiled the wort at Flying Bike Cooperative Brewery, then through hoses joined by a Golden Tri­Clamp, knocked out across the parking lot and into a waiting fermenter at Naked City Brewery & Taphouse.”  ­Don Webb, head brewer at Naked City Brewery.

“Our heartfelt thanks to Nick Kannar and everyone at Big Time Brewery, Brian Henn and everyone at Skagit Valley Malting, Isaac Hatter and everyone at Naked City, and everyone who turned out to help us celebrate this Blossoming Brewmance by joining the ‘Wort Line of Friendship’ across the Parking Lot of Collabeeration with the Golden Tri­Clamp. Also, our deepest apologies to anyone who was trying to park out there that day.” ­Kevin Forhan, head brewer at Flying Bike.

Since 2011, Flying Bike has built a community of over 1,577 beer enthusiasts. It is only natural that Kevin Forhan, at the helm of the FBCB brewing process, is dear friends with Don Webb, the head brewer for Naked City. A mere threshold away, it was only a matter of time before sharing each others’ bar led to a beer celebrating neighborhood unity.