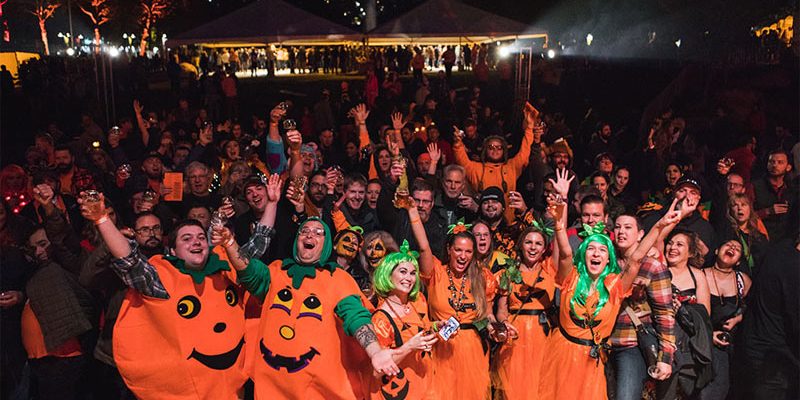 This is the same pumpkin beer festival that Elysian Brewing started 15 years ago. Back then, it was a modest affair at the company’s Capitol Hill brewery and pub. Not much more than a tap takeover, really. Then it grew into something much, much bigger at the production brewery in Georgetown. In recent years, the mother of all pumpkin beer festivals has outgrown the local beer community. Meaning, it’s not just attended by hardcore beer geeks anymore. Since moving to Seattle Center, it has grown into something much larger.

That’s not the only thing that’s changed. The event is now a benefit for Fred Hutchinson Cancer Research Center, with 100 percent of the proceed supporting the fantastic work they do at one of the world’s premier cancer research institutes.

Ticket sales are now live for Fred Hutch Presents the 15th Annual Great Pumpkin Beer Fest (GPBF), taking place on October 4 and 5 at Seattle Center. During the two-day pumpkin-packed 21+ event, more than 80 pumpkin beers will be poured, including classics from Elysian Brewing like Night Owl, The Great Pumpkin, Punkuccino and Dark Knife Pumpkin Schwarzbier along with other delicious surprises from participating breweries.

100% of GPBF proceeds will benefit the Fred Hutchinson Cancer Research Center. Fred Hutch performs cancer and disease research and their work is at the center of revolutionary discoveries and better lives. Elysian is thrilled to support the organization in its efforts to bring Seattle the best brews, local food trucks, live music and fun festivities at GPBF.

Tickets can be purchased from the official event website.

The weekend prior to the Great Pumpkin Beer Festival, on Saturday, September 28th from 12-4PM, we will be hosting the Great Pumpkin Weigh-Off (GPWO) at our Airport Way production facility in Seattle’s Georgetown neighborhood. The GPWO is an event to celebrate the amazing local growers in our NW region. Their giant pumpkins are hauled in, judged, weighed, and prize money is awarded to the winners.

The GPWO is an official, sanctioned event by The Great Pumpkin Commonwealth, and will include growers and their GIANT PUMPKINS from around the region. Local growers will compete to see who has the biggest pumpkin!

BRING THE WHOLE FAMILY – THE GREAT PUMPKIN WEIGH-OFF IS FREE TO ATTEND AND OPEN TO ALL AGES!

Pumpkin carving + other seasonal activities, food trucks, and our beer on tap in the beer garden. There will also be a performance by The Hasslers! You must be 21+, with valid ID, to purchase and consume beer.