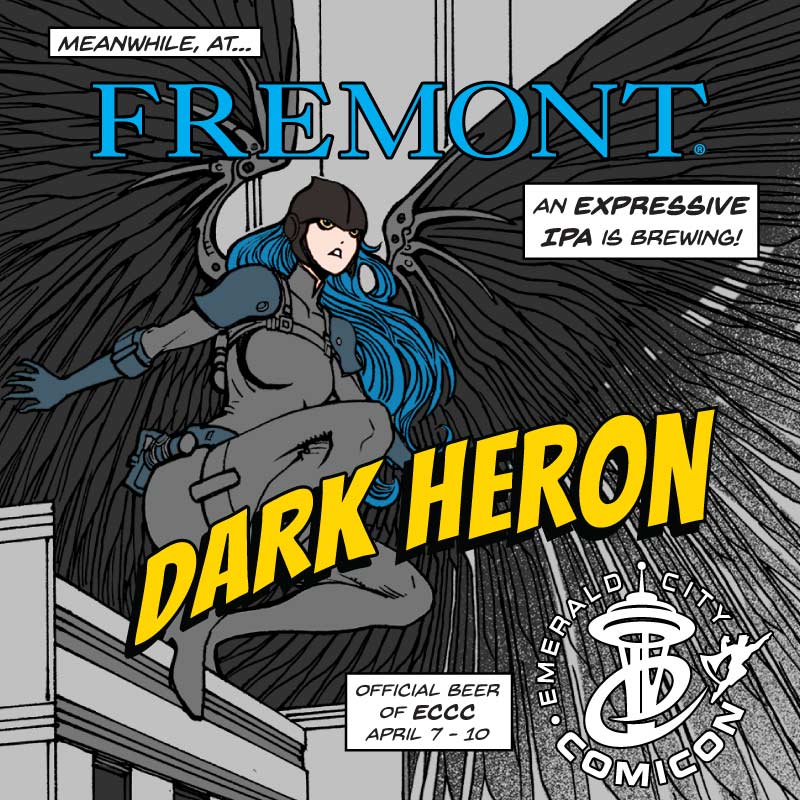 The beer, dubbed Dark Heron, is described as an expressive IPA with experimental, unreleased hops that blend with Mosaic and Chinook hops and lock arms with malted barley and a bit of oats to create the perfect flavor.

“We love partnering with the folks at Emerald City Comicon,” said Matt Lincecum, the founder/owner at Fremont Brewing. “They’re freaking and fun, expressive and innovative, just like us.  It’s an inclusive event that attracts an interesting and diverse audience, from kids to seniors, software developers to construction workers.”

When the seething hordes of comic and pop culture fans descend upon Seattle in April, they’ll be looking for Dark Heron to rescue them from a mind-altering thirst that not only parches the palate but threatens to end civilization as we know it. Or something like that.

The label artwork was created by comic book artist Justin “Moritat” Norman (The Spirit, Elephantmen and DC’s All Star Western) and features an adaptation of Fremont Brewing’s heron logo. She’s a heron heroine.

If you have to ask…

If you don’t understand Comicon, don’t worry. You are not alone. It’s one of those “if you have to ask, you don’t get it” things. Emerald City Comicon started in 2003. Last year it attracted over 80,000 people. Similar events across the country are equally popular. It started out as a comic book convention but has evolved into something much bigger. It’s a fantastical and often costume-clad celebration of pop culture, especially of heroism as displayed in comic books, television and film.

We all have a little bit of it inside us. Just embrace it. I admit that I’m a total geek for Doctor Who.

Here’s the official press release about the beer and the partnership.

NORWALK, CT – February 24, 2016 – ReedPOP, the world’s largest producer of pop culture events, and Fremont Brewing of Seattle, WA today announced the launch of the Dark Heron – an exclusive brew created as the Official Beer of Emerald City Comicon (ECCC) 2016. Featuring a female superhero lead, the beer was created to tap into the swell of comic fans descending on Seattle for ECCC, but will appeal to beer lovers of all types.

Dark Heron, both the name of the beer and the heroine created to represent the beer, is an expressive IPA with experimental, unreleased hops that blend with Mosaic and Chinook hops and lock arms with malted barley and a bit of oats to create the perfect flavor. In celebration of the Pacific Northwest’s largest and most heroic pop culture festival (as well as Seattle’s official bird and Fremont Brewing’s logo), comic book artist Justin “Moritat” Norman (The Spirit, Elephantmen and DC’s All Star Western) adapted Fremont Brewing’s heron logo and crafted the bold spirit of Dark Heron to embody the modern heroine. It will be available in on tap at the show and in bars and restaurants throughout Seattle as well as in 22 oz. bottles in regional grocery stores.  The beer will be available for tasting at a debut party sponsored by Emerald City Comicon and Fremont Brewing on March 9 at the Fremont Brewing Urban Beer Garden – 1050 N 34th St in Seattle.

“Fremont Brewing is proud to partner with Emerald City Comicon for this year’s Official Beer. Like ECCC, Fremont is dedicated to a creative vision, committed to quality, and a little bit weird,” said Matt Lincecum, Founder/Owner, Fremont Brewing.

“Fremont Brewery’s creation and depiction of the Dark Heron embodies everything that characterizes ECCC, representing the uniqueness of the Show and the Fans that attend year in and year out,” commented Lance Fensterman, Global Senior Vice President of ReedPOP.

Starting in 2003, Emerald City Comicon has since become the largest pop culture and comic convention in the Pacific Northwest attracting over80,000 Fans last year. This year’s Show will take place at the Washington State Convention Center in Seattle from April 7-10. For more information on Emerald City Comicon, visit: EmeraldCityComicon.com.

Fremont Brewing is a family-owned craft brewery founded in 2009 to brew artisan beers made with the best local ingredients available. Fremont Brewing is now the fastest-growing brewery in Washington and its Interurban IPA is Washington’s leading craft beer. Other beers include Universale Pale Ale, Summer Ale, and cult classics Bourbon Abominable and Cowiche Canyon Fresh Hop Ale. Their beer has won numerous awards such as 2 Silver medals in the 2014 Great American Beer Festival, the Gold medal in the 2016 Best of Craft Beer Awards, and Rate Beer’s 2015 Best Strong Ale in the World and Best Beer in Washington and is distributed in kegs, cans, and 22 oz. bottles throughout WA, OR, and ID. It can also be enjoyed everyday at their kid- and dog-friendly Urban Beer Garden in Seattle’s Fremont neighborhood. In addition to its reputation for consistent quality and innovation, Fremont Brewing is a recognized leader in sustainable brewing operations and community engagement. Because Beer Matters! http://www.fremontbrewing.com/welcome