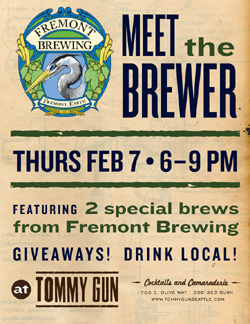 The owner of Tommy Gun, a Capitol Hill libation destination typically recognized for its cocktails (especially whiskey), reached out to me the other day. Erin Nestor wants all of us beer geeks to know that Tommy Gun also cares about beer. Located just a block up the street from Stumbling Monk, Tommy Gun features six rotating taps, plus a dedicated Guinness tap as an homage to Erin’s ancestors. “Tommy Gun is primarily a cocktail bar,” Erin said. “We’ve got about 90 whiskeys on the shelf, but we do love our beer. And we especially love local beer.”

On Thursday, February 7, from 6:00 until 9:00, Tommy Gun welcomes Fremont Brewing for a brewers night celebration. According to Fremont Brewing, this event will celebrate the release of 77 Fremont Select IPA–the company’s spring seasonal session IPA. The man behind the beer itself, Lead Brewer James McDermet, will be at the event. Also, Fremont has brewed a special beer exclusively for Tommy Gun: Wiseguy Ale. Also on tap that night, Abominable Winter Ale infused with oak and tart cherry. Expect swag raffles and all the typical brewers night hoopla.