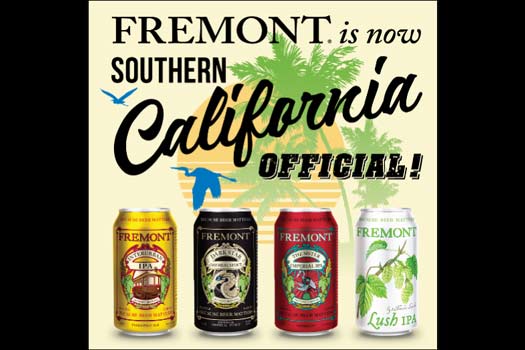 Fremont Brewing is headed south. Way south. The company just announced a new partnership with Stone Distributing that will see the beers distributed in Southern California. Starting on March 6th, Fremont Brewing beers will be available in the San Diego and Los Angeles metropolitan areas and across Orange, Ventura and Santa Barbara counties.

Here is the official press release from Fremont Brewing.

The Seattle-based brewery and taproom was founded in 2009 by Matt Lincecum and Sara Nelson and is now the third largest independently-owned craft brewery in the state with distribution throughout Washington, Idaho, Oregon, and the Denver metropolitan region. Winner of countless awards, including Rate Beer’s 2016 Top Brewery in Washington and several World Beer Cup and GABF medals, Fremont’s brews include their flagship Universale Pale Ale, Interurban IPA, seasonal favorites Summer Ale and Field to Ferment Fresh Hop Ale, and numerous barrel-aged and special release styles.

In addition to its reputation for consistent quality and innovation, Fremont Brewing is a recognized leader in sustainability and community engagement efforts such as giving generously to non-profit organizations, promoting the organic hop and local grain markets, and reducing their carbon footprint through conservation and green technologies. It is for these and many other initiatives that they were named Washington’s Manufacturer of the Year and King County’s Best Small Business.

“Fremont has waited 7 years to begin our relationship with Southern California and we wouldn’t choose any other partner than Stone Distributing for this adventure because they share our unyielding dedication to quality, creativity, and world-class beers,” said Matt Lincecum, Founder/Brewer of Fremont Brewing. “We’re excited to introduce the Golden State to everything from our rotating IPA’s and seasonals to our award-winning bourbon barrel aged beers and mixed fermentation Black Heron Project …Because Beer Matters!”

“We are thrilled to launch an amazing craft brewery alongside our exclusive Stone Distributing portfolio in Southern CA,” said Brian Dewey, Senior Director of Sales at Stone Distributing. “Their award winning beers and sustainable approach to market is such a complement to our current supplier partners and we hope Southern CA is as excited as we are to offer their beers to the craft fan base here.”