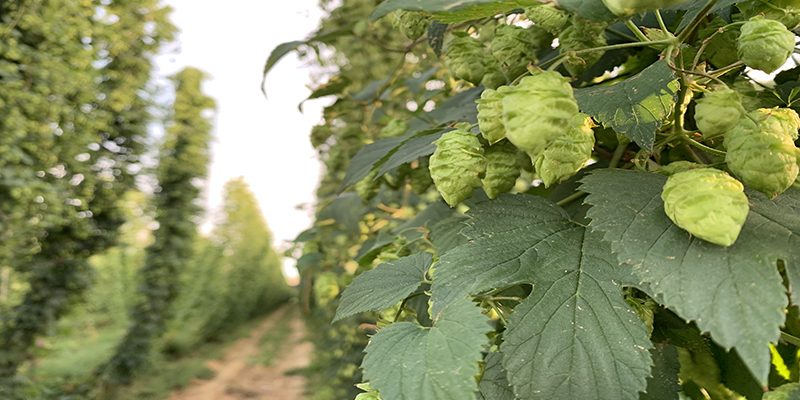 What does September mean in the Pacific Northwest? Football season. Rainy season. Back to school season.  But for beer lovers, it really means one thing – it’s Fresh Hop season! There’s a bevy of events and releases happening all over the region. Too many to track, so if we miss any here please ping us via email, drop a web comment, or leave a comment on Facebook. We will update this post throughout the Fresh Hop season, so come back here for the latest.

Available as of today (subject to change quickly), at these brewery taprooms:

The Parkway invites you to taste this week’s selections as we celebrate this year’s crop. 1313 N I St, Tacoma.

I’m not sure whether to put this under our Fresh Hop beer round-up or our Oktoberfest beer round up, so we will put it in both posts. The clever folks at Perry Street Brewing in Spokane combined the two reasons to celebrate fall beer into one event. Two days full of mugs, food, and specially-released beer…all things Oktoberfest, beer-hall style. The last 5 years they have SOLD OUT of specialty glassware, so they are pre-selling them again early, starting this Thursday, September 12th. Stop by the taproom and reserve yours.  1025 S Perry St, Spokane. Lots more info on their Facebook event page.

Not Washington State, but just across the river so you know they will have a lot of Gorge breweries from both states. Over 50 breweries with over 60 fresh hop beers. Food trucks. Live music. All ages until 5 p.m. 5th and Columbia, Hood River. Tickets online here.

Fresh Hop, College Football and Wings – Releasing an Oktoberfest Marzen Lager and Amarillo Fresh Hop Hazy IPA (available on draft and in cans) alongside other fresh-hopped creations. Phorale & Burger Planet will be serving up some special wings for this event. It’ll be a great time to get some fresh beer and watch some college football games, including UW’s first away game and WSU vs UCLA, on any of the eight big screen TV’s. Order Ranch and Blue Cheese “Dressing for a Cause” to benefit North Helpline. Ages 21+. At Hellbent Brewing, 13035 Lake City Way NE, Seattle.

Get your pre-sale tickets online at the link below (recommended) or at the door (door tickets limited). Purchasing your ticket online guarantees one portion of wings from each truck and one draft beverage. Link for tickets here. 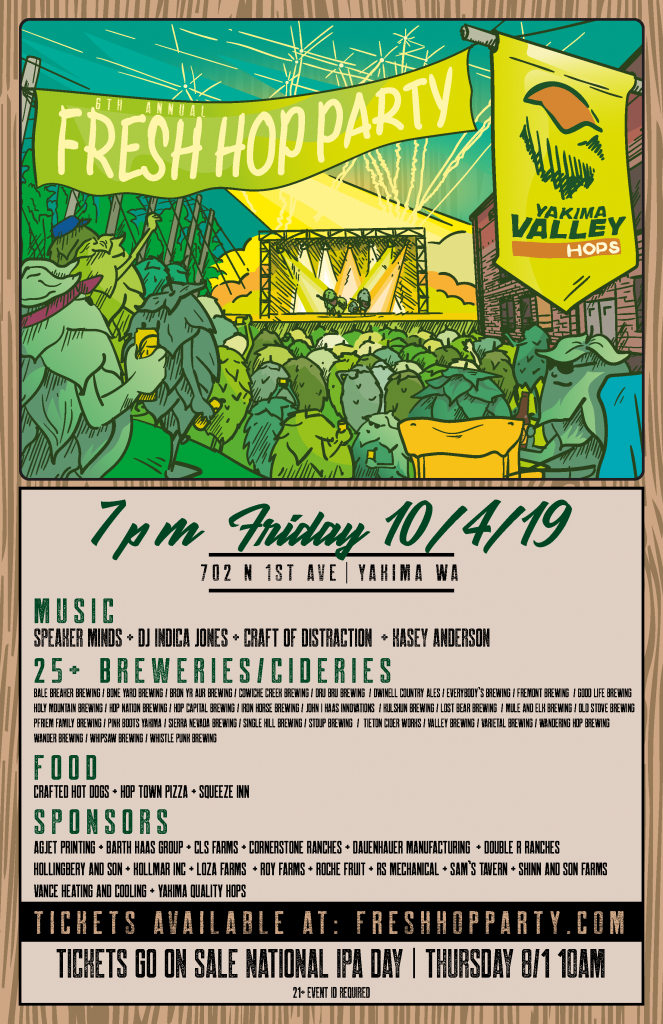 Breakside is well known for its fresh hop program. This year they brewed seven different fresh hop beers and we’ll have at least 3 of them on tap!

We don’t have a lot of details on this, but we recommend that if you want to go, get a spot in line early. This sweet little beer spot fills up fast for this event. 5316 Ballard Ave NW, Seattle.

They will put them on tap throughout September as they become available. During the Fest, expect several taps dedicated to fresh hop beers.

Every Friday in October we will pair two guest fresh hop taps alongside our own, with live acoustic music from regional musicians. Free to the public, all ages.

Not gonna lie, this is our favorite Fresh Hop festival and possibly our favorite beer festival around. You’re so close to the source, that you can smell the hop aroma wafting through town from the nearby kilns and storage facilities.

This year, the festival is in a new larger location at 5 W Yakima Ave, Yakima. Over 70 fresh hop beers plus wine and cider, local food purveyors and rockin live music.

We also just got word that the festival still need volunteers for a variety of positions the day of the festival and for the Sunday clean-up crew. Volunteers get free admission, a t-shirt and more.

Co-Founder and Brewmaster of Reuben’s Brews, Adam Robbings (pictured above (right), along with Head Brewer James McDermet), will lead an exploration for the group on how fresh hops impact beer, shedding light on why these ephemeral beers are so sought after. Andy Roy, fifth generation of Roy Farms in Moxee, WA, will explain how fresh hops differ from hops traditionally used in beers, what challenges come and what opportunities arise from producing and using fresh hops.
Through sampling multiple fresh hop beers – including comparing the same beer made with fresh hops and with hop pellets – you will learn from a farmer and a brewer the ins and outs of hop processing and beer brewing, and why fresh is king during harvest.

Fresh hop beer from 20+ local breweries. At the Georgetown Stables (which is a funky cool venue), 980 Nebraska St, Seattle. 21+ event. See our post about this event! We are giving away tickets.