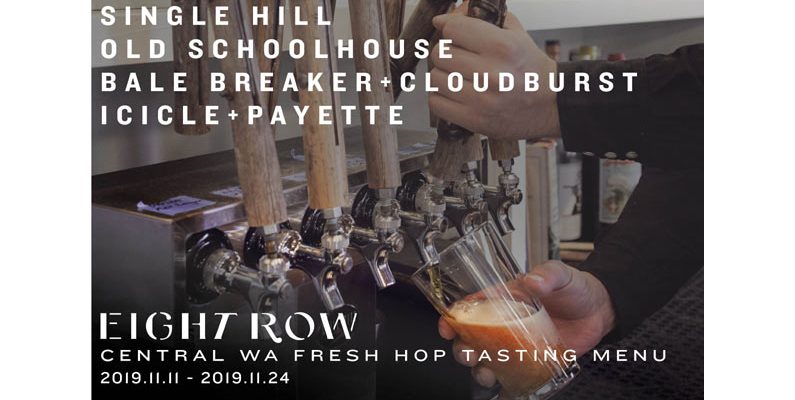 As November rolls along, it is time to say goodbye to fresh hop beer season. The harvest is long since done, the hops have been processed and preserved, and the fresh hop beers of 2019 will soon be nothing but a memory. But before we put the season to bed, one Seattle restaurant has planned a last hurrah in the form of a fresh hop beer pairing dinner menu. Eight Row, located in the Green Lake neighborhood, invites you to join them for a prix fixe pairing menu available for a limited time starting now.

The executive chef and owner, David Nichols, created the menu, designing each dish around a fresh hop beer brewed in Central Washington, home to Nichols’s family orchards. The menu features Central Washington ingredients, like Okanogan beef and produce from Kings Garden in Carleton.

“We’ll feature the tasting menu until the wet hops run dry,” says Nichols. “We partnered with four phenomenal breweries, and are excited to offer a tasting menu centered on one of Washington’s most important crops: hops. The support we’ve received from the producers has been phenomenal.”

“Most fresh hop events are behind us now,” adds Nichols’ brother and Director of Operations, Ian. “This feels a bit like the last hurrah. It’ll be great to discuss with customers the incredible work that these breweries and farmers are doing in a more intimate setting.”

Eight Row describes itself as a passion project by Nichols and his brother, which looks to celebrate the Pan‐American cultural landscape of Washington orchard country, and showcase the work of family farms similar to their own.