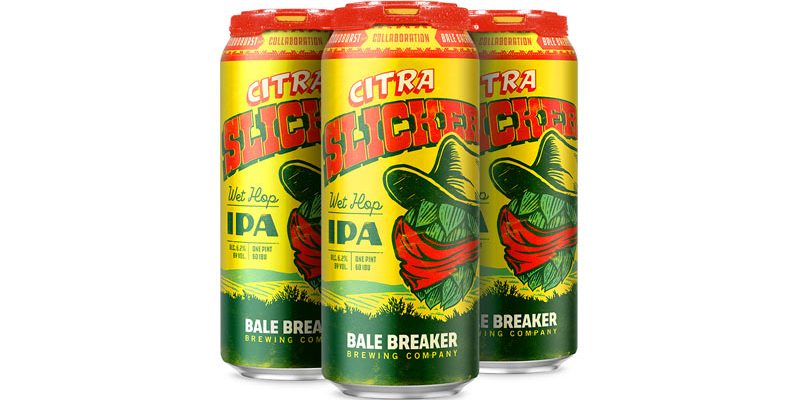 Lots of fresh hop beers are hitting the streets these days. Too many to possibly do a post about each one. But there are two reasons why this is a story of note. First, it’s a fresh hop collaboration project between two breweries often noted for their hop-forward beers: Bale Breaker Brewing and Cloudburst Brewing. Second, because a beer with the name Cloudburst on it is getting canned. Other than crowlers, that’s not a normal thing. Actually, there’s more to the story than that. Read the release notice below.

Each September during hop harvest, the two breweries come together in the heart of hop country to brew this heavily dry-hopped yet light in color and body beer. With notes of tangerine, tropical, pine, and floral, this IPA is all about the fresh, farm-grown Citra® hops that are handpicked from Loftus Ranches’ picking machine and poured directly in the brew kettle in a four-minute turnaround. And for the first time ever Citra Slicker Wet Hop IPA will be available in freshly minted 16oz. cans, giving fans an opportunity to enjoy at home or at their favorite local bar.

“Every harvest, we look forward to hosting the big city brewers from Cloudburst to help brew this irresponsibly-hoppy IPA,” said BBBC brewmaster and co-owner Kevin Smith. “It’s been well-received by the beer industry over the years and we’re proud it’s a wet hop IPA people have come to look forward to every fresh hop season.”

To celebrate, Bale Breaker will be hosting a pre-release party in the taproom this Friday so fans can get a first-taste of this season’s release straight from the source before it hits the brewery’s entire distribution footprint on the first of October. Entry is free, beer and cans are limited. First come, first served!