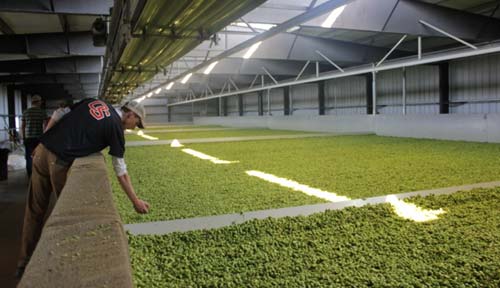 (Aug. 28, 2013, updated Sept. 27, 2018) Yesterday, Elysian Brewing posted a picture on Facebook of Dick Cantwell with two glasses of beer: The Great Pumpkin and Dark O’the Moon, two of the brewery’s many pumpkin beers. Like many of you, I’m not ready for summer to be over, so I’m going to pretend I didn’t see that picture. Then again, maybe I am ready for the seasons to change. After all, I am feeling ready for a fresh hop beer.

The season’s first fresh hop ales are here. Well, not here, but there, in California, where the hops apparently come ready a bit earlier than they do here in Washington. We understand that down at Hop-Meister Farms near Clearlake, California they’ve been harvesting for at least two weeks. A couple of Bay Area breweries that we know of are already offering fresh hop beers: Almanac Brewing and Social Kitchen & Brewery.

Last week, Two Beers Brewing (blog sponsor) received its first shipment of fresh hops and promptly brewed a batch of beer (on August, 20th). They have a leg-up because they know a hop farmer outside of Yakima who has one particular part of a field that comes ready a bit earlier than usual.

The whole point is, fresh hop beers are coming. It’s that time of year. Cheers to that!

So, what is the difference between a fresh hop beer and a wet hop beer? It’s a trick question. These two terms describe the same thing. Fresh hop, wet hop, and green hop all refer to beer brewed using hops that are fresh off the bine and have not been dried or processed.  That’s what I’ve always known to be true and that’s what the Oxford Companion to Beer has to say on the subject. Some people opt for the word harvest, but I find that confusing.

There is no real definition, but most brewers agree that in order to call a beer “fresh hop” it must be brewed using hops that are less than 24 hours off the bine. You know, fresh hops. But what does that mean? Fresh compared to what?

Update (Sept. 2018). The Brewers Association’s Beer Style Guidelines now includes a definition for Fresh Hop Beer. Admittedly, the definition is somewhat at odds with what I say here, but I think a lot of brewers and consumers still agree that “fresh” and “wet” are used to mean, basically, the same thing. In truth, wet hop is a sub-category of fresh hop, but when most people say “fresh hop,” they’re talking about wet hop.

Here’s the BA’s definition of Fresh Hop Beer: “These ales are brewed with freshly harvested hops. Such hops might be undried fresh or frozen cones or ground material, or, freshly kilned dried cones or pellets…”

The BA does not distinguish wet hop beer as a category, but does note (in the complete definition of Fresh Hop Beer) that beers made using freshly harvested, whole cone hops that have not been kiln dried may be considered a subcategory of Fresh Hop Beer.

Quick hop lesson: It is important to understanding what fresh or wet means in this context. Hops are ready to harvest when the moisture level in the cones reaches a particular level, typically around 80 percent. The hop farmers know exactly which varieties need to have exactly what percentage of moisture.

When will this year’s crop “come ready?” That is a function of light and not temperature. In other words, the length of the days and nights dictates when hops are ready for harvest. Higher or lower temperatures may influence the hops, or the farmer’s yield, but the length of daylight controls when they are ready for harvest. That’s why hops come ready at the same time every year. NOW! That’s it. Once a year. End of August through September, then it’s another year before the northern hemisphere’s next hop harvest.

Above. First the bottom cutter comes through, cutting the bines at ground level.

To understand the nature of fresh hops, you must understand the hop harvest and the way hops are processed. This explanation is based on my experience at Loftus Ranches, one of the big hop farms near Yakima. The bines are cut from their roots and within minutes are rushed off to the processing facility. Typically, once the bine is cut from the earth, it’s hard to imagine it taking more than 30 minutes to get it to the processing facility.

Above – the Top Cutter follows the bottom cutter immediately, removing the hops from the trellis. As it is cut, the whole bine/plant falls into a truck. Once full, the truck rushes off to the hop processing machine, usually just a few miles away.

Big, loud, terrifying machines strip the hop cones from the bines. They call it a machine, but it’s more like a little factory that uses a number of methods to separate the cones from the bines, the leafs, and gets the hops ready for processing. Fast-moving, loud, intense. 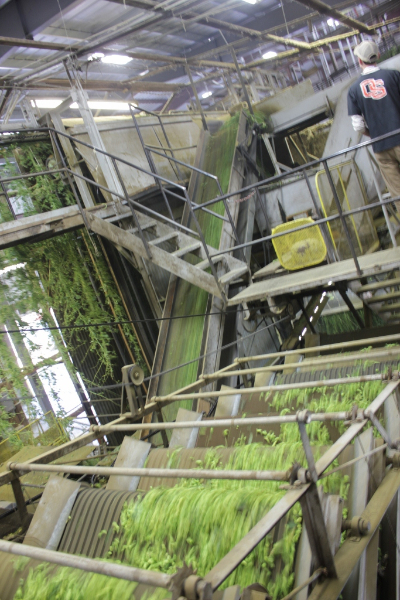 Above – Hop processing machine. Keep your hands and feet away!

The cones are then sent to the kiln, the first and most important step in the preservation process. When you look at a kiln full of hops, you are looking at very fresh hops being dried while still in pristine condition. Capturing the essence of that 80 percent moisture is critical. As soon as hops start to dry out, they begin to lose their oomph. You need to dry them quickly, immediately, and in a controlled fashion to optimize the precious gift that hops offer the world. 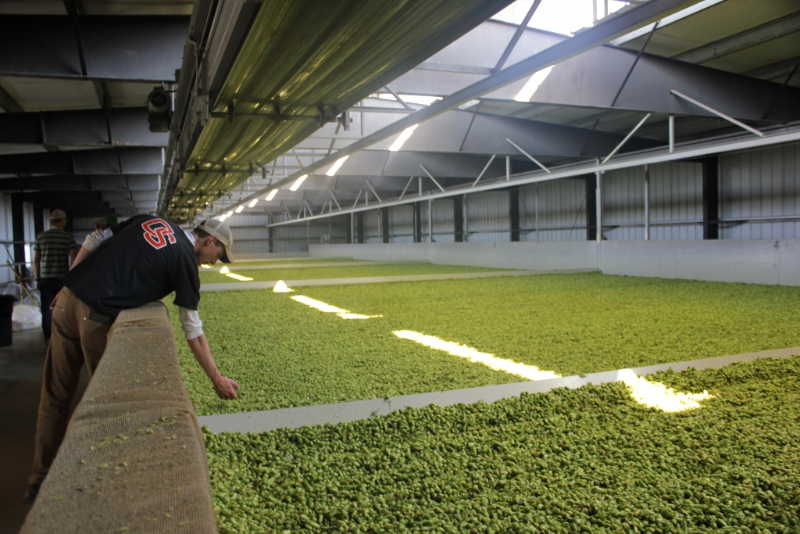 Next, most hops are processed into pellets that look a bit like green rabbit food. These pellets are vacuum packed, stored cold, and can last up to three years.

Some hops remain in their whole cone form. Certain breweries prefer to use whole cone hops instead of pellet hops. They are far and few between. Logsdon Farmhouse Ales, Deschutes Brewing, and a small handful of other breweries across America use only whole cone hops. Dried, whole cone hops are a bit more difficult to preserve, but if properly cared for, they’ll last a year or more. 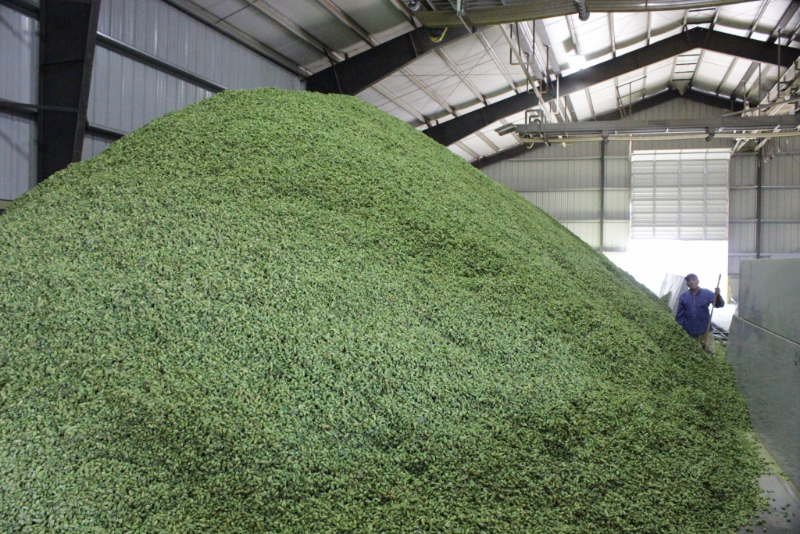 Above – a mountain of freshly dried hop cones.

Understand that when I say “processed hops” I am not insinuating anything negative. Processing hops is good. There is nothing artificial or unnatural added. It is just a matter of preserving the hops so they can be used all year. Cheers to that.

Some hops are intercepted between the field and the kiln. Instead of going to a kiln, they are sent to breweries while they are still wet. Here in the Northwest, our brewers often drive to the hop fields and get the hops themselves. Hop brokers in Yakima regularly package fresh hops and ship them overnight to breweries around the world.

Remember, most people define a fresh hop beer as one made using hops that are less than 24 hours off the bine. Given that 75 percent of the nation’s hops are grown in the Yakima Valley, and (for the most part) the other 25 percent are grown in the Willamette Valley, our local brewers have an advantage when it comes to brewing fresh hop beers.

Using fresh hops is not without its challenges. It’s like trying to make tea with freshly picked leaves instead of a Lipton tea bag. Dried, processed hops are concentrated. Think of dried fruit or beef jerky. When you make a fresh hop beer, you use a lot of hops – a lot of whole cone hops instead of pelletized hops. I’m talking about a large physical mass of hops, regardless of weight. A big bushel of hops goes into the kettle. Brewing a fresh hop beer can be messy and ineffecient. Different breweries have different methods for using fresh hops. Some just throw them in like they would regular processed hops, others get very creative.

Another issue, processed hops are very predictable, but wet hops are not. A brewer knows exactly what to expect from 11 pounds of Cascade pellets. They know how much flavor and bitterness a certain amount of a particular hop variety will add to the brew. How many pounds of fresh hops equals 11 pounds of regular, processed hops? Well that’s a bit of a mystery. I suppose it might depend on how long ago the hops were harvested and how much they have dried. Were they driven from Yakima to Seattle in the back of a van or in the open bed of a pickup truck?

In the end, you get a beer that some say has a bright, fresh hop flavor that is unlike beer brewed with processed hops. That’s why most brewers opt to make a lighter-bodied ale instead of a big, burly stout when brewing fresh hop beer. They want the hops to shine and steal the show.

Are all fresh hop beers brewed using 100 percent fresh hops? No, probably not, but it isn’t polite to ask. You should assume that the term fresh hop ale indicates that some portion of the hops were fresh.

To be fair, some people think fresh hop beers are a bunch of hooey. They think it is just something to get beer drinkers excited and consider fresh hop beer to be a gimmick. Me, I’m not one of those people. I love fresh hop beer, not just for the taste, but because of what it represents. It’s a liquid celebration of the annual hop harvest.

But, you be the judge. Try some. In the next four to six weeks we should start seeing fresh hop beers on tap at brewery tasting rooms, brewpubs and better beer bars.

One more note. Some breweries like to call a beer “harvest ale” or a “fresh hop ale” if they use whole cone hops instead of pelletized hops. I think that is a total copout. Of course, it’s easy for me to say that since I live in Washington where most of the nation’s hops are grown. Around here, fresh means fresh and wet means wet. If you are drinking something called a Harvest Ale in April, and it was brewed by a brewery in the northern hemisphere… well, you do the math. It’d be like a brewery in New Zealand making a fresh hop beer in September.