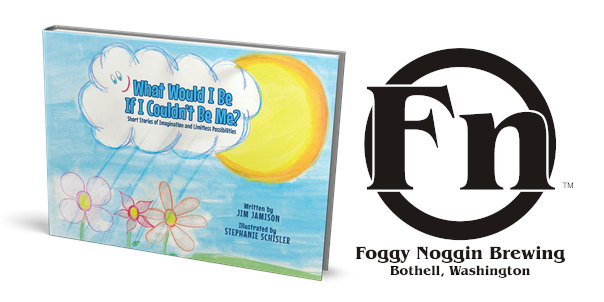 Jim Jameson, the founder of Foggy Noggin Brewing in Bothell, recently introduced What Would I Be If I Couldn’t Be Me? He’s responsible for the story while his daughter created the illustrations. We recently bought a copy as a gift for our niece. It is adorable! It’s a book about exploring your imagination, a practice with which Jim is familiar.

Let’s just say that there was no roadmap for what Jim did when he opened Foggy Noggin Brewing back in 2010. At the time, not many people could have imagined turning their backyard shed into a brewery and their garage into a taproom, but that’s what Jim did at his home in a residential neighborhood in Bothell.

Whereas I’d normally be posting something about a Foggy Noggin beer release, here is the announcement introducing the book’s release.

The COVID-19 situation has made life as we knew it all different. How about brewery owners and brewers writing a Children’s Book? Why not?

Unleashing the imagination of children is often overlooked. What Would I Be If I Couldn’t Be Me? is an excellent opportunity for parents and children to explore their imaginations with limitless possibilities. The author ( Jim Jamison) was inspired by the birth of his first grandchild to create a book to share with them. This has a great storyline for a child and parent to interact with more questions that enhance the child’s imagination. Use this book and the discoveries made to continue exploring other things the child could be if they couldn’t be themselves.

About the Author Jim Jamison was born in Portland, Oregon. He was active in sports (baseball, football and golf) and music (piano). He graduated from Wilson High School (Portland) and attended Oregon State University (Corvallis), graduating with a B.A. Business/Finance from Portland State University. After moving to Bothell, WA in 1985, Jim and his wife Kim raised three children who all graduated from Bothell High School. He has been in sales for the last 37 years and opened and operates a small micro-brewery ( Foggy Noggin Brewing) in Bothell. Jim continues to enjoy watching sports, playing golf, playing piano and spending quality time with his three grandchildren.

About the Illustrator Stephanie Schisler, daughter of Jim, was born in Seattle, WA and grew up in Bothell. Soccer and golf have always been her sports of choice and has always had an artistic knack. She graduated from Bothell High School and Washington State University with a B.S. in Kinesiology. Stephanie and her husband, Lee, are currently raising two children. She is an active owner and brewer in the family’s small micro-brewery ( Foggy Noggin Brewing).

The book was just recently released for purchase on Amazon and Barnes & Noble in Kindle, Paperback and Hardcover formats.