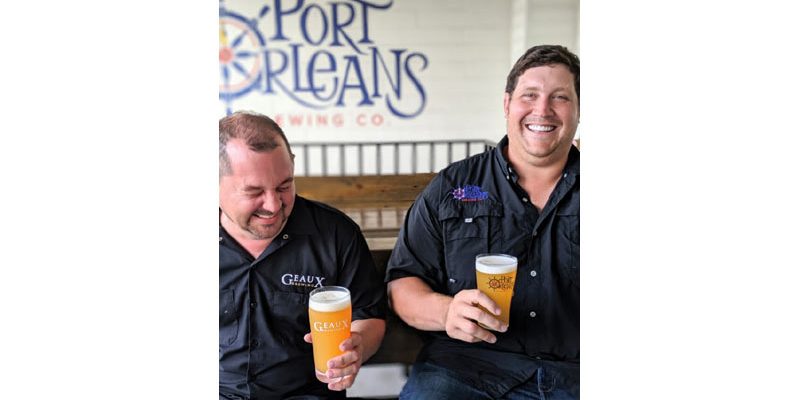 Geaux Brewing of Auburn teams up with Port Orleans Brewing of New Orleans to create a very special beer and a weekend of events to benefit ALS awareness and research.

By now, I think most local beer enthusiasts have figured out that Geaux Brewing has strong ties to New Orleans. The brewery’s name, the names they give the beers, the style of food they serve, and the decor at the taproom in Auburn, Washington are all dead giveaways. And then, of course, there’s the allegiance to the New Orleans Saints. Geaux Brewing’s taproom and restaurant is a destination for the Seattle area’s Who Dats (hardcore Saints fans). This Sunday, the New Orleans Saints take on the Seattle Seahawks at Century Link Field in Seattle. Leading up to the matchup, Geaux Brewing’s owner, Jeremy Hubbell (along with his head brewer Evan), traveled back to his hometown to brew a very special beer with Port Orleans Brewing.

“Getting a call from Zach Strief at Port Orleans Brewing to come together and support ALS through a collaboration beer was a no-brainer,” says Jeremy Hubbell. “Most folks around here know that I’m kind of a Saints fan.”

Zach Strief is not only a former offensive lineman for the Saints, and now a broadcaster who calls the Saints’ games and co-hosts a weekly show on New Orleans radio, he is the part-owner of Port Orleans Brewing in New Orleans. “The opportunity was just awesome,” says Hubbel. “You tie that in with Steve Gleason and his Team Gleason foundation and you’ve got an incredible chance to make some beer, do some good, and maybe, absolutely, have a little fun while doing it.”

Steve Gleason is a former New Orleans Saint and a former Washington State Cougar who is afflicted with ALS. His foundation has raised millions of dollars to assist and benefit others who are also battling the disease.

“The beer we brewed, Geaux to Port IPA, is a true Northwest-style hazy IPA,” says Hubbell. “It’s made with malted barley from Skagit Valley Malting and hops from just over the hills in Yakima. In fact, it’s the first time that Skagit Valley Malting’s products have been used in Louisiana. This is going to be a fun beer to share with everyone—something that we hope to be able to do with Port Orleans on a regular basis moving forward.”

The beer will be tapped on Friday at the Geaux Brewing taproom in Auburn. To commemorate the occassion, support Team Gleason, and celebrate the Saints visiting Seattle, here’s what Geaux Brewing has planned this weekend.

Geaux Brewing will open early, at 9:00 A.M. and feature live jazz along with café au lait and beignets until noon. Folks can stop by the brewery for some pre-funk activities before taking the train up to Century Link Field for the game.

Not going to the game, hunker down all day at Geaux Brewing and watch the Seahawks play the Saints alongside your fellow 12s or Who Dats. The taproom will broadcast the game on all of the big screens. After the game, Geaux will host an after-party for fans of both teams.