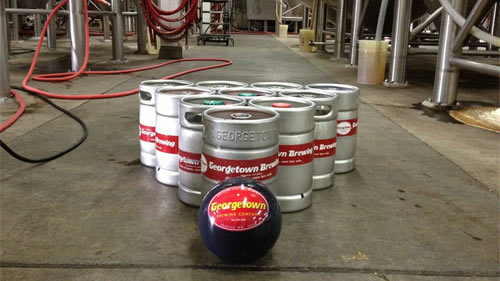 Every year the Brewers Association releases its list of the Top 50 Craft Breweries in America. That is, its list of the 50 top-producing craft breweries in America based on sales volume. Some years, I publish it here on the Washington Beer Blog. When I do, there are usually a few people who only read the headline, don’t read the copy, and then immediately scroll down, hoping to find that their favorite brewery made the list. Again, this list has nothing to do with best.

Historically, the Top 50 Craft Breweries list is void of any breweries from Washington state, but in 2018 a local brewery finally cracked the top 50. Seattle’s Georgetown Brewing made the grade, coming in at number 41. It’s quite an impressive feat that they’ve grown to this size while still remaining, basically, a local brewery. Georgetown Brewing sells the vast majority of its beer right here in Washington. A lot of the other breweries on the list benefit from the pursuit of wider distribution.

The Brewers Association defines a craft brewery as one that is “small and independent,” among other things. Basically, this excludes the likes of Anheuser-Busch, MillerCoors, Elysian Brewing, Goose Island and other non-indie beer companies. Those breweries are included on a different list: the Top 50 Overall Brewing Companies. Comparing the two lists, 40 of the breweries on the Overall Breweries list are deemed small and independent (craft) by the Brewers Association. That is, 40 of the 50 biggest breweries qualify as craft breweries.

Based on sales volume, here is the list of the Top 50 Craft Breweries in America.