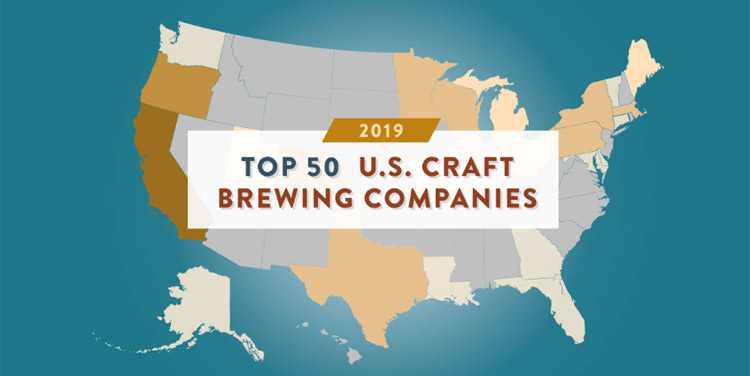 First up, this is not a best-of list. This has nothing to do with the best breweries. Sorry if you feel cheated.

Every year the Brewers Association (BA) publishes the list of the 50 top-producing craft breweries in America based on the previous year’s production data. In a nutshell, the BA defines a craft brewer as small and independent. They also publish a list of the overall top 50 beer producers, which includes non-craft breweries. Obviously, Anheuser-Busch tops that second list, which we do not share here.

Seattle’s Georgetown Brewing cracked the top 50 last year, coming in at number 41. This year they moved up the list to number 33 and they also showed up as number 43 on the overall list. Georgetown Brewing is the only Washington brewery on either list.

On the list that includes all of the breweries, both craft and corporate, 40 of the top 50 breweries qualify as craft breweries.

The word craft is used loosely in the beer biz these days. Back in the 70s and 80s, before craft beer was a thing, breweries were fond of using the word premium. Similarly, craft is a subjective term, but the definition we are talking about here is the one used by the Brewers Association: a craft brewery is small and independent.

It defines “small brewery” as one producing 6 million barrels of beer or less per year. The number was adjusted several years ago to accommodate craft breweries that outgrew the old threshold. The BA defines an “independent brewery” as one that is less than 25 percent owned or controlled (or equivalent economic interest) by a beverage alcohol industry member that is not itself a craft brewer.

Of course, the numbers 6 million and 25 percent are subjective. But alas, you need to define your terms somehow, and the BA’s definition is pretty widely accepted. At least it is accepted by the breweries who fit the definition. It’s like pornography: I can’t tell you what it is but I know it when I see it.

Truth is, up here in the Pacific Northwest, the concept of craft vs. corp has meaning. Around these parts, many beer drinkers are aware of the difference and make their buying and drinking decisions accordingly. In my limited experience, beer-drinking folks in less-mature beer markets have little interest in independence and their eyes glass over when you start to talk about the issue.

Not entirely unrelated, I’ve also noticed that beer drinkers in other parts of the country cannot correctly pronounce the word elysian. As in, “Oh, you’re from Seattle? I love that ee-LIE-sheen Space Dust.” Then they go catatonic as I tell the story.

Are there surprises on the list this year? I don’t know. It hasn’t changed too much. You decide if something is surprising. You can see last year’s list here.