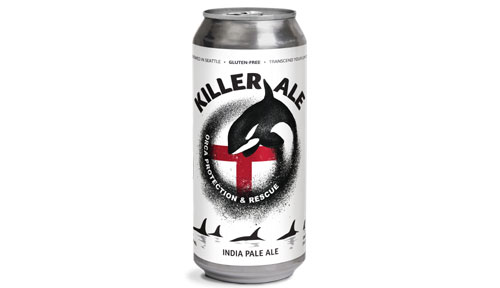 The beer and the partnership between the brewery and Orca Protection and Rescue (OPR) is the result of a chance encounter between one of the brewery owners and the captain of a whale watching boat.

“I met Captain Hobbes while I was a passenger on his whale watch tour boat last summer,” says Brian Thiel, co-owner of Ghostfish Brewing. “What I learned about the Southern Resident Killer Whales (SRKW) that day from Captain Hobbes left me pondering what I could do to help improve their survival.”

Founded in 2018 by Captain Hobbes Buchanan, Orca Protection and Rescue is dedicated to the protection and rescue of all marine wildlife in the Salish Sea, by reducing private and commercial vessel harassment, assisting with strandings and entanglements, and ridding the waters of ghost fishing gear, marine debris, and plastics.

“Brian seemed like he really cared about the whales so I decided to approach him with this partnership idea,” says Captain Hobbes. “Who doesn’t love whales and ales? It just seemed like a match made in heaven and a great way to raise funds to help save these magnificent animals. Orca whales are looking like the canaries in the coal mine. If we don’t act now to save them, we humans are the next to go.”

Join Ghostfish Brewing and members of the OPR organization to celebrate this partnership and the release of Killer Ale IPA at an educational-themed launch party at the brewery’s taproom on March 9, from 2:00 until 5:00. On the day of the event, the brewery will donate $1.00 from any beer purchased at the taproom.

At the event, representatives of the OPR will speak on various topics pertinent to their organization’s mission as they relate to the Southern Resident Killer Whales (SRKW) population of the Salish Sea. The main topics include food, harassment, noise, and marine debris and plastics.

Killer Ale IPA will be available in limited 4-packs of 16-oz cans and on draft at the Ghostfish Brewery Taproom. Also at select retail locations throughout Washington. Ten percent of the proceeds from the sale of Killer Ale IPA benefits the OPR.

“With the Killer Ale IPA project, we’re hoping to inspire many others to make small positive steps to help our environment,” says Brian Thiel. “The Killer Ale IPA cans will be held together in a 4-pack carrier made of eco and animal-friendly, paper-based beverage board material from Fishbone Packaging. A small, yet important step for Ghostfish Brewing to be more environmentally responsible.”