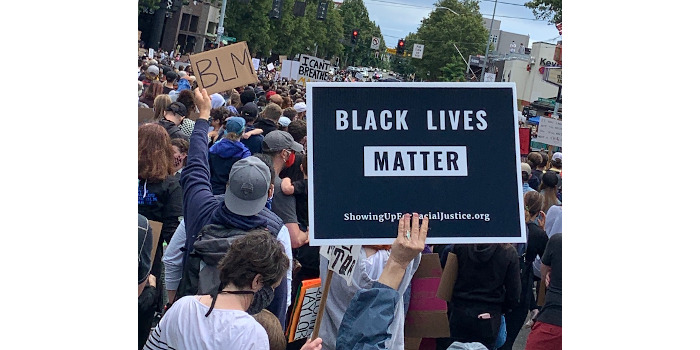 Craft beer enthusiasts looking to buy beer this Friday should know that a lot of breweries have announced that they will be closed. As for us, the Washington Beer Blog will not post or share any stories on Friday, June 12th in solidarity with Black Lives Matter and the general strike and silent march. (above: last Saturday’s peaceful protest in West Seattle.)

In 2018, the Brewers Association appointed J. Nikol Jackson-Beckham, Ph.D. as its first-ever Diversity Ambassador. While the move was admirable and necessary, it was also overdue. From brewery owners to craft beer drinkers, the lack of racial diversity in the craft beer industry is glaring.

It is regrettable that the industry en masse has taken so long so to acknowledge and address the issue. “Inclusivity” is a word that the industry has always bandied about, but there was never any noticeable action.

When I say those things, I am pointing a finger at myself. Maybe I am giving myself too much credit, but I do have a voice. For too long, I’ve been silent on this issue. At least, I have been silent here on the Washington Beer Blog where my voice is amplified. I’ve made excuses to justify my silence. That stops now.

Everything I just said about the craft beer industry, and about myself, applies to the larger issues of racial inequality and racial injustice. I’ve always known it was there and I have always despised it. Although my inaction and my silence are regrettable, what’s most important is this moment right now and how I choose to move forward from it. As an imperfect human being, it is all I can do and it is what I must do.

Here at the Washington Beer Blog, I serve as a reporter, a journalist, an editor, and a publisher. The Washington Beer Blog is me. I don’t do it alone, but the buck stops here: I am solely responsible for what you read on these pages. I want to be clear about this: I support Black Lives Matter. I stand with them against police violence toward the black community and I support their efforts in calling for change.

America continues to suffer because of the systemic, generations-old racism that is manifested in so many ways across our society. The effects of racism permeate our entire society but the most egregious suffering falls entirely on people of color.

Kendall Jones and the Washington Beer Blog need to do a better job of understanding these issues and speaking out about them. I pledge to do so moving forward. I am not perfect, but I strive to do better. I think we all should.