As we’ve reported, Heather and Matt McClung, the founders/owners of now-defunct Schooner Exact Brewing, recently resurfaced and are helping steer Hale’s Ales Brewery into the future. Part of their plan involved resuming kitchen operations at the brewpub. Now we’ve learned that Chef Warren Peterson is joining them in that mission.

Back in 2012, Schooner Exact Brewing in Seattle’s SoDo neighborhood managed to secure the services of Warren Peterson, who’d previously worked for Tom Douglas Restaurants, where he served not only as a chef but as the company’s “beer czar.” It was quite a coup. At Schooner Exact, he created some great dishes and hosted some amazing beer dinners. 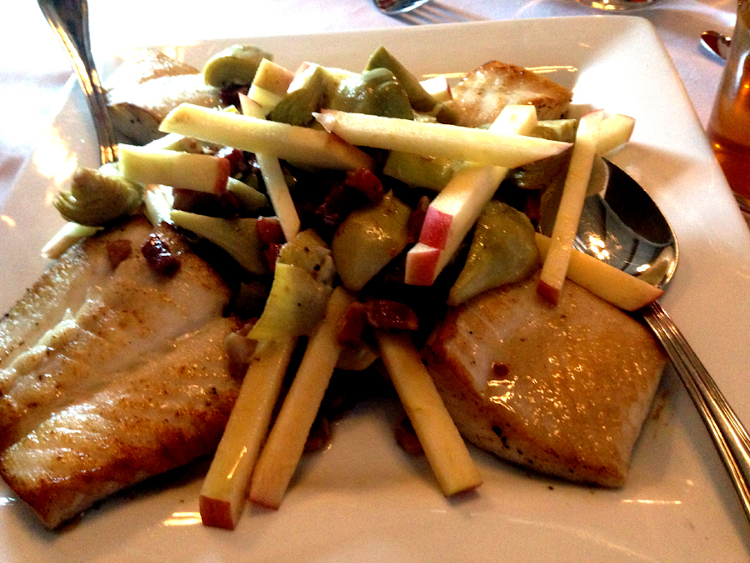 ABOVE: Served at a beer dinner at Schooner Exact many years ago, pan-seared halibut with braised artichoke, pancetta, and apple. Will Hale’s serve up food of this caliber? We’ll see.

At some point, Warren decided to move along. Eventually, Schooner Exact Brewing Company did too. Now it’s all just a fond memory. The SoDo location is now the home of San Juan Seltzer Company’s brewery and tasting room.

Here’s a statement from Hale’s Ales Brewery about the recent changes and the addition of Chef Warren to the team.

Hale’s Ales excitedly announces their return to the restaurant industry, effective mid-September. In October, Hale’s will launch their new menu cultivated by Chef Warren Peterson. We are excited to have Warren lend his culinary talents to Hale’s renaissance.

Warren is passionate about craft beer and great food showcasing the ingredients through simple, honest preparations. Warren began in the Seattle food scene at the Tom Douglas restaurants. He transitioned to Schooner EXACT Brewing company to get closer to the craft beer and help Matt and Heather McClung launch Schooner’s restaurant. Today, Warren splits his time between Seattle and San Diego.

Truth to the Ingredients

Breweries and pubs have historically been places where people gather, build community, and share food and beverage. We are excited to take up the challenge of running a restaurant amid pandemic market conditions and to be able to offer a place for community to gather that is uniquely Hale’s from beginning to finish. Sharing the same ethos as Craft Beer, our food will showcase high-quality ingredients with honest, accessible preparations. The menu will be comprised of old favorites inspired by Hale’s and Schooner’s menus such as meatloaf, hummus plate, BLAT, and the classic Burger in addition to new dishes. For those used to getting their Mexican food fix, we will have carnitas and picadillo tacos.

With regret, due to a recent liquor board enforcement ruling, El Camion and Hale’s must part ways. We wish the El Camion staff all the best and thank them for the good food and friendship over the years. We look forward to eating at their trucks around Seattle.