Happy IPA Day! Apparently, August 1st will evermore be known as IPA Day. Remember to tweet using #ipaday, assuming you tweet at all. To commemorate the day, I want to share a story I wrote about 10 years ago: More Than You Need to Know about IPA. I wrote this for a different website (beerchurch.com) back when we were still developing our collective love for big, hoppy IPAs. That is, they were becoming more common but had not yet really taken off.

It is amazing how close I came to getting the story right. Sure, back those days we had the internet, but we did not have Garrett Oliver’s The Oxford Companion to Beer, which is now my primary go-to source for information like that shared in the article below. What I’m saying is that I know some of my information is a bit off.

Remember that it was pieced together back in the olden days from various online and offline sources. For the most part, I got the story right. I made a few critical corrections in the original story, which you’ll see enclosed within brackets. Additionally, Garrett Oliver’s Beer Ox neither confirms or denies much of the stuff in my article.

Lastly, get your own copy of The Oxford Companion to Beer. Every self-respecting beer geek should have it.

More Than You Need to Know about IPA

I have long been a fan of IPA. Back in the day when most people had never heard of craft beer, it was my favorite style of ale. Today, it seems that more and more people are learning to love IPA. On one level, I’m very grateful; my chances of finding IPA on tap at the local watering hole has greatly increased. On the other hand, I’m amazed that so many people like IPA. It is an aggressive style—much too bitter for timid beer drinkers and much too strong for newly converted yellow-beer drinkers.

Until recently, people thought you were a serious beer geek because you knew that IPA was an acronym for India Pale Ale. Nowadays, it seems that everyone knows that much. In fact, almost everyone knows that it was originally a colonial beer formulated to handle the voyage from England to India. The higher hop and alcohol content helped to preserve it for the 6 months the beer would spend at sea before reaching the lips of thirsty, homesick British colonialists.

If that’s all you know about IPA, then I suppose you deserve a smiley face on your report; however, if you want to consider yourself a real beer geek you need to know more. [Okay, that’s nonsense. You should know the truth and let go of the myth that the beer was designed to endure the voyage. It was not designed to endure the voyage, it just worked out that way. Read on.]

A common misconception is that IPA was a style of beer invented specifically and intentionally for the voyage to India because the troops in Calcutta were homesick and thirsty. Let’s dispel that myth.

Plenty of beer was making it from England to India back in the late 1700s. In London, Porter was especially popular. Unlike today’s Porter, the old Porters were strong—about 7.5 percent alcohol. Porters traveled especially well. There is historical evidence that porter successfully reached India prior to the introduction of IPA. As I said, the lads were homesick and thirsty. Porter tasted like home.

Still, IPA is not porter. 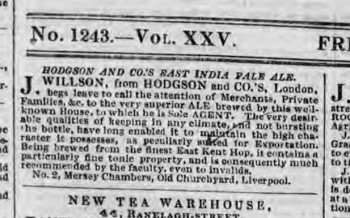 An important name in the chronicles of IPA is George Hodgson—often cited as the inventor of IPA. In the late 18th and early 19th century, George worked for the Bow Brewery, on the river Lea just east of London. [The Beer Ox contradicts itself about the location. Whether it was on the River Lea or the River Thames, it was close to the East India docks.] There is no historical record of George Hodgson actually planning to create what we now consider IPA. There is no historical record that he had much interest at all in trying to corner the Indian beer market. It just happened.

George Hodgson got lucky on two accounts. [While George was not oblivious to the opportunity, it was his son Mark, who took over the brewery in 1805, that should maybe get credit for creating a beer specifically designed for the Indian market.]

First, the Bow Brewery was the closest brewery to the headquarters of the East Indianmen—the merchant ships that went back and forth between England and India. When the ships’ captains went looking for a brewery, they didn’t have to look far to find the Bow Brewery and George Hodgson. [Not sure where I learned that Hodgson’s brewery was called Bow Brewery.]

Second, the voyage had a fortunate effect on a particular batch of beer. George brewed up a batch of October-brewed stock bitter ale, which made it onto a ship headed for India. Perhaps it was the first non-porter to make the voyage, though there is no record of that. On the voyage to India—via the frequently turbulent waters off the Cape of Good Hope—Hodgson’s October stock ale underwent the sort of maturity in cask that would have taken up to two years in a cellar.

It was not a secret recipe. October stock ale was brewed specifically to age for a long period—up to two years. It featured a lot of malt (making it strong) and many hops (making it bitter). It was a rather common style back in those days.

Because of the conditions encountered during the voyage, Hodgson’s beer arrived in India in prime condition. There is no evidence that he planned this or that he had any idea that it would happen. He was just lucky.

[The whole story above is called into question by the Beer Ox, which notes that there is evidence of Pale Ale in India before Hodgson even opened his brewery.]

By all accounts, it was very good beer. George was no dummy and quickly branded the beer, “Hodgson’s Indian Pale Ale.” [Actually, Hodgson’s East India Pale Ale.] Why did the lads in India prefer it instead of Porter? Who knows? Eventually the style –or a less-travelled version of the same style– became popular back in London, too. [Especially popular with colonialists returning to England from India.]

At one point, Hodgson controlled, perhaps, as much as 50 percent of the market in India. This is largely because of his proximity to the East Indiamen headquarters and his willingness to extend credit to the ships’ captains.

Other brewers knew what he’d done and followed suit. They all knew that strong ale with high hop content would travel well. They all knew how to make October brewed stock bitter ale. Now, they all knew the secret. Put it aboard a ship and send it out to sea.

Today’s IPA has little in common with Hodgson’s Indian Pale Ale. IPA is basically a strong Pale Ale made with more hops.

As a beer geek, you likely know that within the basic IPA style, there is huge variation. Some IPAs are stronger than others are. Some are sweet and others are dry. Some are very bitter and some are not. Some have a floral nose. Some do not. IPA is either copper colored, pale blond, or golden.

Congratulations, you likely know much more about IPA than the bozo sitting on the next bar stool.