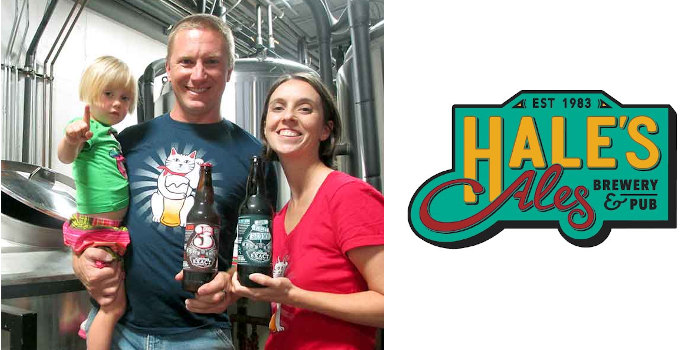 I recently did a Facebook live video interview with Heather and Matt McClung. (Pictured above with their daughter Ellie about 5 years ago.) I share the video below. Here is a bit of the backstory and some highlights from that interview.

Back in 2007, the couple started Schooner Exact Brewing. It’s a long story, but that brewery ran its course and by the beginning of 2018, Heather and Matt had stepped aside and let it go. Under new ownership and direction, the brewery soon turned its focus to seltzer: San Juan Seltzer, to be exact. Sad to see a brewery go, and it was probably a very emotional time in their lives, but that’s all history now.

Heather never drifted too far away from the beer industry and soon found herself working with Mike Hale, the founder of Hale’s Ale Brewery. Her role was to get the business operations shored up and help reimagine the future of the brewery as Mike Hale, now in his 70s, was looking towards his well-deserved retirement.

As for Matt, he went on a sort of sabbatical and persued some other interests before, as he puts it, “Getting hired by my wife.”

What can we expect from Hale’s Ales moving forward?

Matt has instituted some quality assurance measures and is looking at creating some new, modern beers. He’s integrated some new QA equipment to help quickly examine the beer for quality without the need to send the beer out to a lab for analysis. On the day we conducted the interview, the brewery was cooking up a new IPA. Matt described it as a “post-modern IPA, with Citra hops.” He also said that it is not going to be hazy. Imagine that. Look for that one in cans in two or three weeks.

That QA improvement will come in handy as the company starts to transition from bottles to all canned products. Of course, they’ll produce draft beer, too.

On grocery store shelves and bottleshop shelves, people are used to seeing the tried-and-true Hale’s Ales flagship beers like Mongoose IPA and Hale’s Kölsch in bottles, but soon they’ll begin to see a wider assortment of beers in cans, including new beers like the one they were brewing today. Also, for all you Schooner Exact fans, you will likely see some new versions of Matt’s old, best recipes.

Heather explained that in recent years the sales staff was focussed largely on promoting and supply a constant stream of Hale’s Ales’ most familiar beers, but now they’ve infused the sales department with a new direction, as well as some new blood and energy. This includes the addition of industry veteran Allison Ringe as the Sales Manager.

As far as the pub side of the business goes, expect to see some changes there too. In early 2018, Hale’s Ales basically minimized their food menu and eventually turned over the entire kitchen and food operation to El Camion, a local food truck operator. So, El Camion was selling its food inside Hale’s taproom.

Heather explained that in the not-too-distant future the kitchen will return to the brewery’s control, so the taproom will once again be a brewpub. For those that remember the food at Schooner Exact, Heather says her philosophy hasn’t changed and you should expect a similar menu. In fact, there is even some talk that Chef Warren Peterson, who was the original chef at Schooner Exact, might be returning to the team. One thing at a time.

To learn more, watch the video below. We will be sure to feature updates about what’s happening at Hale’s Ale Brewery as the future unfolds.