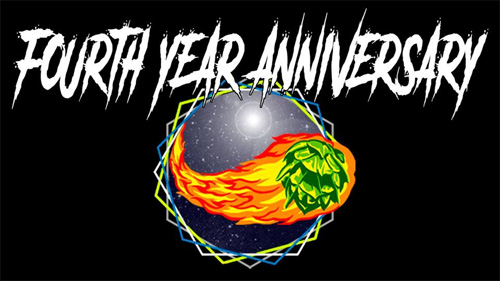 On Saturday, June 8th Hellbent Brewing in Seattle celebrates its fourth anniversary. The anniversary celebration runs all day, from noon until 11:00, and features music, food trucks, and special beers.

They’ll clear out the parking lot to create a “beer garden blowout.” Live music runs all day, featuring four bands, culminating with Ayron Jones at 7:00. Food will be available from five different food trucks. Keep an eye on the Facebook event page for details and updates. Music and food truck schedule below.

As for the beer, Hellbent will release its Anniversary IPA (described below) at the event, along with several other special beers, including some favorites from the cellar.

In honor of Hellbents 4th anniversary, we have produced an ultra-premium IPA to commemorate the event.  Using obscene amounts of Amarillo Hops along with a bunch of Simcoe, Citra and Mosaic hops this beer bursts with citrus followed by a pungent pine punch and finishing with mellow tropical hop aromas. This beer is brewed with Pale and Vienna malts accented with Honey malt, and Carapils malts. It is unfiltered for maximum hop flavor. 7% ABV   63 IBU