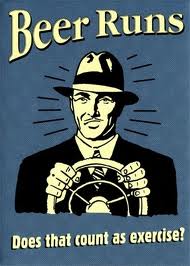 You’ve heard of the Bermuda Triangle, right? Well this is more like the Beermuda Triangle. That’s the nickname many people have given Poulsbo. Visiting all three tasting rooms in one session is known as the Poulsbo Trifecta: Sound Brewery, Slippery Pig Brewery, and Valhol Brewing.

Enrollment is limited to just 300 runners. Be sure to sign up early to qualify for some incentives. Go to the official website. More details below.

This is a 4 mile Run that includes tasting Poulsbo’s best beers along the way. Visit Slippery Pig Brewery, Sound Brewery, and Valholl Brewing. Three breweries, 4 miles, a beer at each.

You’ll start with a beer from your “Home Brewery” and run to the other 2 breweries. At each brewery you’ll enjoy an awesome beer. Then when you return “Home” you’ll have a beer from a one of the guest breweries. The guest breweries will be as follows: Slippery Pig–Rainy Daze Brewing; Sound Brewery–Slaughter County Brewery; Valholl–Bainbridge Island Brewing.

We will hold a raffle drawing on February 15th for those who have already registered. If your name is drawn, your registration fee will be refunded! You can only win if you are registered by February 14th at midnight, so SIGN UP NOW!

Need another reason to SIGN UP EARLY? If you register before March 5th, your race bib will be personalized with your name!

Finishers of the run will receive a special pub glass with the Poulsbo Beer Run logo. There will be a poker run with awards for the best and worst hand. As always, this race is DOG friendly.

This year’s run will be limited to the first 300 runners registered, with starts from all 3 breweries (100 runners at each brewery).

T-shirts are available for $15. Must be ordered by March 1.

Registration price will increase to $40 after March 1.

Online registration will close on March 11 at midnight.

All proceeds will benefit the Blue Star Banner Program of Kitsap County.