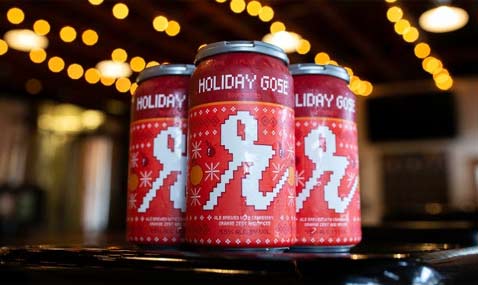 It seems like only yesterday that any kind of gose was considered “out there.” Beer pundits like me questioned whether the beer drinking public would ever cozy up to a style of beer noted for its slightly sour, slightly salty character. Well, I think we all know how that turned out. On Tuesday, October 16th Reuben’s Brews releases this year’s Holiday Gose. Not just a gose, but a gose flavored with cranberry and orange. Just like mom used to make!

Is October too early for an ugly holiday sweater? Not when it’s wrapped around our Holiday Gose!

This cranberry-orange variation of our award-winning gose is fermented with our house lactobacillus culture and includes fresh cranberries, sweet orange zest, a touch of coriander and a hint of sea salt.

We’ll have it on tap and in 4-packs of 16oz cans in the taproom on Tuesday, Oct. 16 beginning at 11 a.m. Holiday Gose will also make its way to store shelves around the Pacific Northwest in the coming weeks.