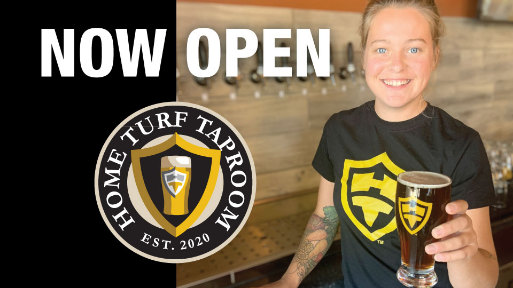 A new taproom just opened in Parkland, Washington that features a dozen beers on tap. No big deal, right? Well, of those 12 beers five of them are brewed by a local brewery exclusively for Home Turf Taproom: a blonde, a red, an IPA, a double IPA, and an imperial stout. Yeah, I know what you’re asking.

For the unaware, the community of Parkland is located between Lakewood and Puyallup. Home Turf Taproom is just off HWY 512, near McChord AFB, and is just 1.5 blocks from Pacific Lutheran University. (Go Lutes!)

Away from its exclusive, house brands (yeah, I know what you’re asking), Home Turf Taproom will focus on serving beers from some of their favorite craft brewers in the Puget Sound area, citing the likes of Rueben’s Brews, Diamond Knot Brewing, Bale Breaker, and more.

“We fell in love with this space as soon as we saw it,” said Max Fosberg, Taproom Manager. “It’s a great centralized location with 104 new apartments above us, Pacific Lutheran University one and a half blocks down the street, JBLM nearby, and fabulous neighborhood restaurants steps away in every direction.”

According to the press release, “Like most taprooms, outside food is always welcome at Home Turf, whether you’re bringing it from home, bringing in takeout, or ordering delivery. The bar provides some snacks, like chips and pepperoni, but they have menus from the neighborhood restaurants when you’d like to eat a full meal in the taproom. Trapper’s Sushi, Ferrelli’s Pizza, 208 Garfield, and many other restaurants are on the same block.”

“We’re having a great time getting to know our business neighbors and meeting people from the area — everyone has been extremely inviting and welcoming,” continued Max. “And a large number of residents in the Garfield Station apartments are stationed at JBLM or attending PLU.”

Other features include large flatscreens for watching the big games, shuffleboard, board games, and a private event space. Although hours and capacity are restricted due the pandemic, Home Turf offers indoor and outdoor seating and a full-size garage door that helps keep the air fresh when the weather allows.