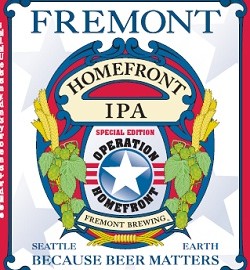 Last June we reported that then-Mariner pitcher Chris Ray is an avid home brewer with dreams of going pro (read it). We met Chris at Fremont Brewing Company where he was brewing the first batch of Homefront IPA. He was wide-eyed as he raked the mash. He shoveled the wet grain out of the tun like a seasoned veteran, only with greater enthusiasm. These mundane brewing chores seemed to excite him. And why not? It was his first time pitching yeast in the big leagues. Today we report that Chris Ray is at it again.

The physical labor at Fremont Brewing was practical, hands-on experience. Recognizing that his professional baseball career comes with an inevitable expiration date, Chris Ray decided that opening a brewery would be part of his exit strategy. He and his brother are currently in the process of building their own brewery in Ashland, Virginia: Center of the Universe Brewing (COTU Brewing).

Chris Ray and Fremont Brewing created Homefront IPA to raise money and awareness for Operation Homefront, an organization providing emergency financial and other assistance to the families of our service members and wounded warriors. The beer was available at the ballpark and around the Seattle area. This year Chris greatly expanded the project’s scope and the beer is being brewed at six different breweries across the country. The project is now dubbed Hops for Heroes (visit the website).

Baseball ambassadors and special events will be announced in the upcoming weeks. We will have more information for you when it becomes available. For now, we can tell you that Seattle Mariner relief pitcher Todd Wilhelmsen will be the local Homefront IPA ambassador.

See all of our previous stories about Homefront IPA.