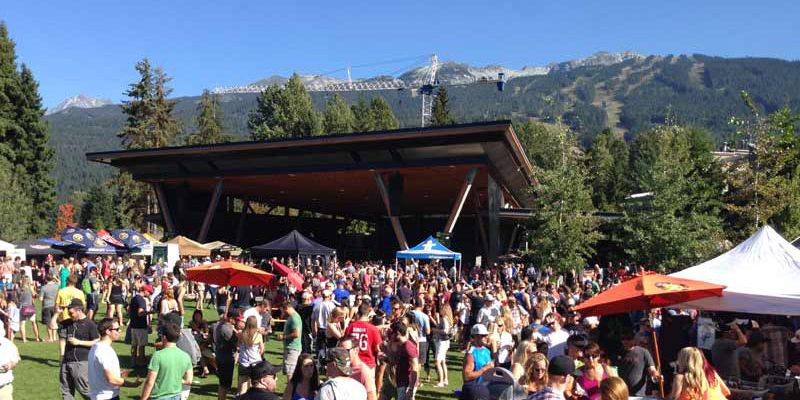 A lot of beer is consumed in the year-round resort community of Whistler, British Columbia. Each year the Whistler Village Beer Festival is more than a fun time for beer enthusiasts, it is a competition of sorts. Essentially, the brewery garnering the most “peoples choice” votes earns the right to supply beer to some of Whistler Village’s busiest bars for the coming year. It is a lucrative contract, to be sure.

The Whistler Village Beer Festival took place last weekend and featured over 120 beers and ciders from 60 producers. The winner of the coveted title this year was Coast Mountain Brewing, which happens to be located in Whistler. (Home field advantage? Perhaps, but I can personally attest to the fact that Coast Mountain makes damn good beer.)

The WBVF is a really fun event in a really, really cool location. I’ve been twice and highly recommend it to non-Canadian beer lovers. It provides an opportunity to sample some of Western Canada’s best beers in one place. See our previous posts about this event.

Here’s the press release wrapping up this year’s event.

“What a BLAST!” said Katrina Frew, Festival & Events Director of Gibbons Whistler, “Regardless of the weather people had a great time! We definitely upped our game this year with 7 days, 32 events, 4,400 attendees, 60 breweries, 120+ brews being poured, and so much more.”

Winning multiple awards at this year’s festival was Coast Mountain Brewing from Whistler, who not only took home the title of the Heavyweight Champ and Best in Fest, but also won this year’s Master Crafters: Haze Craze, presented by Grimm’s Fine Foods. Their delicious brews will be available on draught at The Longhorn Saloon and Firerock Lounge, and bottles will be available at Garibaldi Lift Co. Bar & Grill (GLC) starting October 2019 for a year.

Best in Fest runner up, and winner of a draught line at Tapley’s Neighbourhood Pub and bottles at Merlin’s Bar & Grill, went to Backcountry Brewing, an owner-operated brewery from Squamish BC.

Third place went to Fuggles & Warlock, who have been keeping beer weird since 2012. They have won a draught line at Norman Rudy’s in Squamish, and bottles will be available at Dusty’s Bar & BBQ in Whistler. People’s Choice, presented by Preston Mobility, was too tight of a race to call at the end of the two-day Main Event and will be announced through WVBF’s social channels in the coming days.

The Gibbons team has already started planning for WVBF 2020 and looks forward to welcoming everyone back to Whistler next year. Early bird tickets for #WVBF2020 will be on sale soon. For more details about Whistler Village Beer Festival and a list of all the breweries in attendance click here.