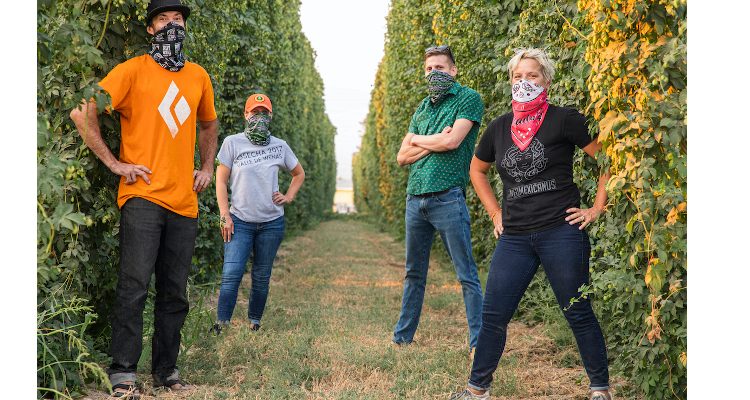 One in Eight is a breast cancer awareness and fundraising program organized by CLS Farms, a fifth-generation hop grower in Moxee, Washington. To raise money for breast cancer research, CLS Farms partnered with other key members of the hop industry in the Yakima Valley. Brewers are encouraged to use the official One in Eight hops—freshly pelletized Triumph hops—to brew a beer to support the cause and to recognize Breast Cancer Awareness Month.  Pictured Above, L to R: Michael Roy (Roy Farms), Cherie Steinmetz (CLS Farms), Jeff Perkins (Yakima Valley Hops), and Shelley Desmarais (CLS Farms).

CLS Farms grew and donated the hops from its recently harvested 2020 crop. The Triumph hops were then pelletized at Roy Farms. Brewers of all sizes, including homebrewers, may purchase the hops from Yakima Valley Hops. For each pound sold, more than $4 will be donated to Wellness House of Yakima, an organization founded in 1988 to support cancer patients and their families in the Yakima area.

Breweries participating in the program include Varietal Beer Company (Sunnyside, WA), Cloudburst Brewing (Seattle, WA), Hop Capital Brewing (Yakima, WA), and Barkerville Brewing (Canada). We will update the list as more breweries hop aboard. (See what I did there?)

Triumph was first grown at the USDA hop research facility in Corvallis, Oregon and has a noteworthy pedigree that includes Nugget, Brewers Gold, East Kent Goldings, and Hallertau Mittelfrüh. Alpha content clocks in at 9-12 percent, with high myrcene and humulene content and low cohumulone. It is described as bringing strong fruity notes (peach, lime, orange) with secondary notes of spice and pine.

Why is it named Triumph? Dr. John Henning, a plant geneticist at the USDA who helped develop the variety, just happens to like Triumph motorcycles.

For more information about the One in Eight program, visit https://1in8.co/