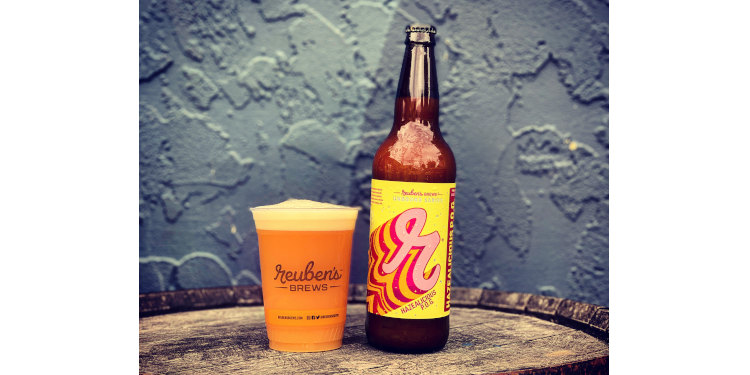 Someone once told me that the taplist at the Reuben’s Brews taproom intimidated her and made her feel dizzy. It wasn’t really a complaint as much as it was a comment on the vast selection. I explained the logic behind overwhelming customers with so many choices. One of the greatest values a taproom offers a brewery involves introducing new, small-batch, and one-off beers. Customer feedback is valuable and can help determine the eventual fate of such beers.

Case in point, at Reuben’s Brews a former one-off beer has now graduated to become the latest offering in the Unbound Series—a series of beers focused on adding innovative twists on year-round brews. The Unbound Series beers are available in 22-ounce bottles.

The story of Hazealicious P.O.G. is the latest chapter in the story.

This week we released bottles of Hazealicious P.O.G., the latest release in our Unbound Series. We’ve taken our award-winning year-round hazy IPA Hazealicious and doubled down on the tropical hop flavors by adding Passionfruit, Orange, and Guava.⠀
⠀
This is a perfect example of how a beer that starts out as a one-off Taproom release can grow over time to be a distribution release around the Pacific Northwest. Hazealicious P.O.G. wouldn’t exist if it weren’t for our Taproom, where we first tried a single keg infusion of these fruits in Hazealicious. With your enthusiastic response to the beer this summer we were able to scale this recipe to a special growler-only release, before brewing this full-size production batch for distribution.⠀
⠀
Available now at our Taproom and To-Go Store and in distribution around the PNW soon!⠀