What do Floodlands Brewing, Holy Mountain Brewing, and Fremont Brewing have in common? Well, besides the obvious, those are the three top-rated breweries in Washington according to Untappd. But how do Washington’s breweries and beers stack up against the rest of the nation? I wondered that, and then someone came along and handed me an analysis of the data. If you are a skimmer and not a reader, I’ve emboldened some text for you.

As promised in a previous post, below I share some data analysis of beer ratings on Untappd as related to Washington breweries and Washington beer. This info was provided by Derek Gaughan of Brewfuse and he has his own methodology, which seems pretty legit to me. He originally contacted me with some overall analysis of data from Untappd, but I was more interested in how it applied to Washington since that tends to be the focus here on the Washington Beer Blog. More specifically, I was curious about how Washington breweries and beers ranked against those from all the other states. Also, how do they stack up against each other?

“Overall I looked at ~1,800 US breweries that had a beer listed as one of Untappd’s top 50 beers in any category (that dataset had over 9,000 beers),” said Gaughan. “So overall the sample used could be considered a sample of the top rated breweries, definitely not a complete list.”

Do you understand? Read it again slowly.

“Breweries that had a beer listed as one of Untappd’s top 50 in any category.” Not every brewery in the nation, but breweries with some kind of beer in the top 50 of some category. In a nation with over 7,000 breweries, I guess you could say these are notable breweries. Gaughan filtered out states with less than 20 breweries because many of them had so few that it didn’t make sense to compare with other states. Obviously, these criteria exclude some great breweries, but lines must be drawn.

The first chart shows the average brewery rating grouped by state. As you can see, our Washington’s breweries rate right about in the middle. Note that the range of scores is very tight. Just .16 difference between top and bottom. Vermont leads the way at 3.87, down to Wisconsin at 3.71, suggesting that there is good beer everywhere according to Untappd ratings.

The next chart shows how many breweries from each state appeared in Gaughan’s sample of ~1,800 breweries (Washington had 62, tied with Minnesota). It’s not surprising that California had so many breweries appear here: that state has the most breweries overall, by a long shot. 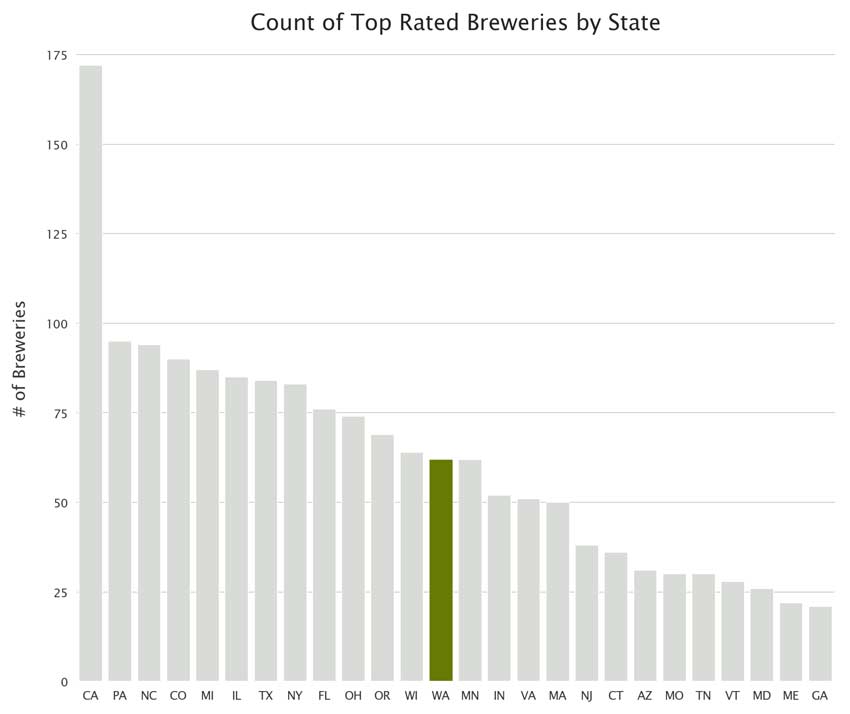 The bar chart below shows the number of breweries in each city for Washington. That is, Washington has 62 breweries in the dataset and this is where they’re located.  As expected, Seattle led the way with 17 breweries. Woodinville, Vancouver, and Bellingham followed, respectively. 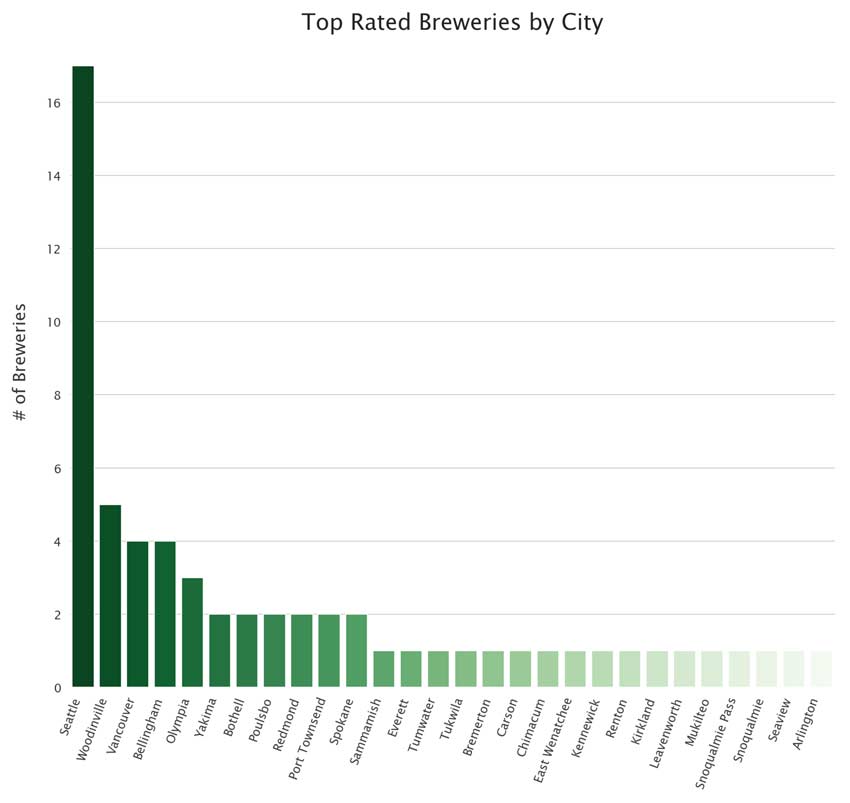 I want to make it clear that we are talking about a select group of breweries: only those breweries with beers rated on Untappd and a beer in the top 50 of some category. Below, the list of Washington’s 62 breweries, including the brewery name, city, and Untappd rating. Note that there are some anomalies. The list includes cider producers, for instance. Also, the list includes at least one brewery that no longer exists.

Washington’s top breweries on Untappd, according to data analysis performed by Brewfuse (not me) and according to the criteria explained above.

New laws that benefit Washington breweries are on the way
Local beer industry forges ahead beneath the shadow of COVID-19
How one brewery is navigating this upside-down world: Fremont Brewing