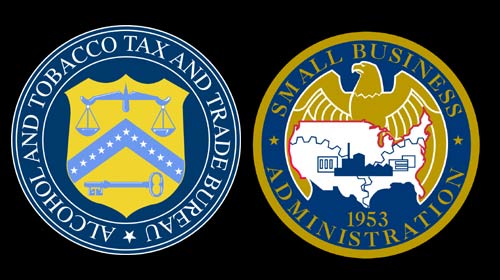 Okay, I know that this is pretty low on the list of priorities, but the current government shutdown is causing some headaches for existing breweries and coming-soon breweries. Likely, it will lead to more widespread headaches in the future. There are plenty of other people writing stories about how the shutdown is affecting the many other, more important functions of government but I want to share some info about how it impacts the brewing industry. If nothing else, you might learn a thing or two you didn’t know about the beer biz.

All breweries deal with the Alcohol and Tobacco Tax and Trade Bureau (TTB) on a regular basis. Once it gets back to work, it is very likely that there will be a backlog for any dealings with that agency.

The TTB must approve each new brewery before it can brew legally. Basically, they issue federal brewers permits. Those who’ve opened a brewery know all about navigating that thorny maze and jumping through those burning hoops. Unless the TTB issues a Brewer’s Notice, you cannot legally make or sell beer. They’ve got their reasons and you don’t have to like them: it’s the law. (Next time I’ll fascinate you with a lesson in brewers surety bonds.) If you are a brewery-in-planning, and you’re waiting for the TTB to give you that golden ticket, you’re out of luck until the shutdown ends and the logjam clears.

But what about breweries that are already approved and making beer? Well, it is very likely that some new beer releases are already being delayed as breweries wait for label approval. The TTB must approve each new beer label design. Within guidelines, some changes are allowed to previously approved labels, but one way or another every beer label you see was approved.

The TTB must also approve new beer formulas and processes that it deems nontraditional. A brewery must submit a formula for approval if it intends to produce “any fermented product that will be treated by any processing, filtration, or other method of manufacture that is not generally recognized as a traditional process.” Yes, they do make it clear what processes they do and do not consider traditional.  New recipes that include the addition of “fruit, fruit juice, herbs, spices, honey, maple syrup, or other food materials,” also require approval.

Any brewery looking to introduce a kumquat, oregano and pinto bean IPA will have to wait until the shutdown ends and the TTB catches up, especially if that brewery plans to ferment it in a hollowed-out cottonwood stump. (You can read more about this fascinating topic here.)

Breweries regularly file a “Brewers Report” with the federal government. And, of course, that is all about paying federal taxes. Basically, the report shows how much beer the brewery produced and that, in turn, determines the size of the tax bill. This is the federal part of beer taxes. State taxes are another matter.

As you have probably guessed already, the shutdown does not affect a brewery’s ability to pay taxes and breweries are required to report and pay during the shutdown. I just checked and the Pay.Gov website is up and running. Of course it is.

It may come as a surprise to many people who imagine breweries to be private enterprises funded entirely by a brewery owner’s very fat checkbook, but most breweries fund things like initial construction and continuing expansion with loans from banks and equity partners. Many breweries rely on a stream of loans to fund ongoing operations. Such loans are often dependent on the creditor getting information from government agencies, which are currently closed.

The Small Business Administration (SBA) is closed, for instance, so small businesses do not currently have access to those federally assisted loans. Again, once that agency reopens, backlogs are likely.

I know that the impact on the brewing industry is not a matter of national security and we have bigger things to worry about, but there it is.

If you know of other ways the industry is impacted by the shutdown, use the comments section below.