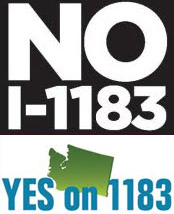 If you already decided how to vote on Initiative 1183, it is unlikely that anyone can change your mind. Discussions have degraded to the point that they now sounds more like shouting matches than cogent debates. It is now more like a football rivalry than a political issue.

Some people are still undecided and have asked for my opinion. I suppose they think I know more about the issue than the regular Joe. That may or may not be true. I know this much, seemingly smart and informed people are entrenched on both sides of this issue. Below, I share some opinions from people in the beer business just in case you’re wondering what they think.

My opinion is just that. It is only my opinion. I want the state out of the liquor business but I do not want it done this way.

1) It should be done in a manner that best serves the citizens of Washington. The changes should be instigated by smart people, working for the best interests of the citizens of Washington, who truly understand the larger and more complex issues involved, and not by business entities that stand to make billions of dollars and can afford to wage a campaign in their favor. If we the people choose to write the laws in a way that benefits Costco and other big-box stores, that is fine. But Costco and other private interests should not be trusted to write the laws. (Honestly, I have nothing against Costco. It is just my opinion on this issue.)

2) The complete overhauling of our state’s liquor laws is way too complex and important to be managed by the voting public. Just as we will always vote for lower taxes regardless of the ramifications, we will always vote for the promise of cheaper liquor even if it is against our own self-interests. Sadly, we cannot be trusted with a decision of this magnitude. We are too easily lured.

3) This is really at the heart of the matter for me: I am sick and tired of the way our initiative process has been usurped by private interests. I have vowed to vote NO on all initiatives until the process is cleaned up.

Anyway, it really is not my intention to tell you how to vote. I am just sharing my opinion.  I should also state that I am a Husky fan. Vote YES on Huskies. Vote NO on Cougars.

Last week I put out a call to members of the beer industry asking them to email me their opinions. I received some great responses. I am a bit surprised that I didn’t get any “Yes on I-1183” statements from people in the beer business. I know they’re out there, right? Take that for what it’s worth.

For the most part, I’m going to preserve anonymity. The people who made these statements can comment and take credit if they so choose. Here are some of the things people in the beer biz told me.

From an owner of a beer and wine specialty store:

I think it’s bad for the little guys – from the distilleries to the wineries to the brewers (yes, beer is in there on page 37) and to the stores. What might have made more sense would have been for Costco to ask other folks to help get behind this. That is, rather than making the determination of who is allowed to sell [liquor] based on square footage (obviously leaning towards only big box stores), they should have based it on percentage of sales, much like how we are classified as a bottle shop. So in order to sell spirits, you need to have 95% + of your sales be from beer/wine, which would eliminate your gas stations and mini-marts, etc.

From an owner of a beer and wine specialty store:

Beer drinkers know top-notch breweries like Rogue Ales and Dogfish Head Craft Brewed Ales are getting into distilled products. And they’re asking their local shopkeepers for these spirits. However under current law, only state-run and stores contracted with the state can carry liquor. Will I-1183 allow these local businesses to offer a few shelves of spirits? No.

I-1183 prevents neighborhood wine and beer shops from carrying liquor. Initiative 1183 specific language that excludes most metropolitan and suburban shops from carrying liquor simply due to the size of their store and availability of liquor at nearby larger businesses. Stores, like [mine], are excluded from carrying full portfolios, limited only to beer, cider and wine offerings. The shop is 8,655 square feet too small to qualify to sell liquor, according to I-1183.

Why the 10,000 square foot store size requirement to sell liquor under I-1183? Does a smaller store make a business more irresponsible? Are they afraid of a little competition from smaller shops? Why the exclusion? Don’t exclude your local Mom & Pop shops; cast a vote against I-1183.

From an owner of a Washington microbrewery. Greg Parker, of Iron Horse Brewing, explains his concerns in detail on his blog. Read it here.

As someone who has staked his entire future on the ability to make and sell beer profitably, I am going to be voting no on I-1183. While there are many arguments stated by the “no” community (some valid and others I find inflammatory), I will be outlining issues that are lesser known and meaningful only to me, my staff, other small breweries, small wineries, and small beer stores, and . . .  Okay, I am trying to be dramatic, when the truth is I only care about keeping my kids outfitted with Italian made shoes. Nonetheless, I will outline what I believe to be considerable concerns for the craft brewing industry in Washington state… Read it.

From an owner of a Washington microbrewery:

I voted *NO* on 1183 for the following reason: the origin and the majority of financial support for the initiative did not come from the “people.”  I realize corporations have every right to sponsor any sort of legislation they deem important but this is about money and not as much about process.  Process is what privatizing should be about, in my opinion.  So long as the laws are equitable, the money will sort itself out and the more enterprising group or groups will simply make more money.

Yes, the WSLCB should be in the booze business but only the enforcement side of things.  I say, let the free market prevail when it comes to booze but I want to see legislation that is equitable to all parties and mandates adequate enforcement standards in terms of allocated dollars and badges.

I have said before that kicking the State of Washington out of the booze business will not turn our craft-beer drinkers into yellow-beer drinkers and it will probably open up even more channels of distribution for craft breweries.  Overall, I think it’s a good thing but the initiative process has to be more reflective of and supported by the people it will directly affect and not simply the group with the biggest war chest.

From someone in the wholesale distribution business:

First off, by legalizing volume discounts Costco will be able to negotiate much lower costs than mom and pop stores selling booze and wine.  This will put those suppliers in Costco (a very limited selection) at a large advantage vs. the rest of the suppliers on the market, making the big brands get bigger and hurting and potentially killing the small suppliers.  Why does this matter?  Costco has stated publically that if they win then they are going to go to neighboring states with similar initiatives and that beer is next.  If they are able to essentially overturn the 3-tier system then craft breweries are going to be at a huge disadvantage.  There’s a reason there’s basically only Coke or Pepsi in the soft drink world – those two suppliers are able to buy “shelf contracts” at grocery stores/on-premise to exclude competitor products.  If there’s no 3-tier system then ABI (Anheuser Busch Inbev) and MC (MillerCoors) will be able to “buy exclusive space” at the grocery store/tavern and put craft brewers at a severe disadvantage.  ABI and MC could buy business at bars and restaurants, keeping craft beer handles out of the up and down the street sorts of places.  Sure, there will always be a market for a “craft-beer” tavern/tasting room/bar, but the sort of mass availability of craft beer we have today would eventually be gone.

Second reason for voting NO is that by increasing massively the tax on booze in these tight budgetary times they will make the state look for the next place for revenue enhancement from the alcohol world – beer.  When the Federal tax was raised in 1991 that dramatically impacted beer sales, and WA raising taxes on beer (again after the June 2010 increase on large brewers) would really hurt the WA beer industry.

I’m not against WA getting out of the distribution and sales of booze in principal, just against I-1183 and before that I-1100.  The legislature should do it, with a more thoughtful approach than Costco has taken.

Vote YES or vote NO. Just make an informed, thoughtful decision. That’s all I ask.