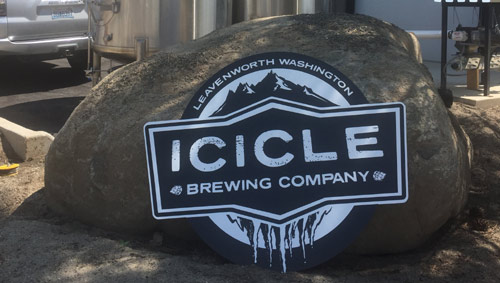 Last week I stopped by the brand new Icicle Brewing Company production facility in Leavenworth. You are invited to do the same on Thursday, June 13th. The Grand Opening and Community Open House event runs from noon until 9:00, with live music, beer, and food. On top of that, you can tour the new, larger, state of the art brewery. Keep an eye on the Facebook event page for more details.

The opening of the new facility enables Icicle Brewing to expand its distribution footprint, or at least more fully serve the markets to which it already distributes beer, by providing as much as a four-fold increase is production capability. It is also allowing the company to double down on its commitment to the environment.

Here’s the disconnect. As the beer ferments, it burps CO2 into the atmosphere. It just “disappears” into the air. If you’ve visited a brewery, you may have noticed hoses coming out of fermenters and into buckets of bubbling water. That’s CO2 escaping into the atmosphere. That’s the creating CO2 part of the story.

Then, for packaging purposes, breweries purchase CO2 that has been manufactured. Typically, it is harvested as a byproduct of the ammonia production process. That’s the consuming CO2 part of the story. The CO2 produced during the brewing process goes unused. In its raw state, it really isn’t useable. What’s worse, CO2 emission is not exactly the most eco-friendly aspect of the brewing process. In a perfect world, we would be able to make beer without adding CO2 to our atmosphere.

Earthly Labs of Austin, Texas recently introduced a CO2 recovery system that allows breweries to capture the CO2 created during fermentation. The system processes the CO2 and makes it available for the brewery to use further down the line. This is not necessarily new technology; such CO2 recovery systems have long been used at large breweries, but never before has the technology been scaled down for use in smaller, craft breweries. (When it was still open, the large Redhook facility in Woodinville used a CO2 recovery system.)

Installing a CO2 recovery system is kind of like planting a new forest. Trees absorb CO2 from the atmosphere and produce oxygen. (Remember high school biology?) The system that Icicle Brewing just installed is capable of reducing CO2 emissions equivalent to 400-1600 trees planted per year.

As far as taste goes, some might say that all CO2 (a carbon atom bonded to two oxygen atoms) is all the same regardless of its origin. Others suggest that CO2 produced by fermentation actually tastes better. Whatever the case, I cannot imagine how it could taste worse.

Meanwhile, at the Icicle Brewing location in downtown Leavenworth, the brewing equipment has been removed. They are currently working on a much-needed expansion to the taproom. Before long, they will install a new brewing system that will produce smaller-batch beers, largely to feed demand at the taproom itself.