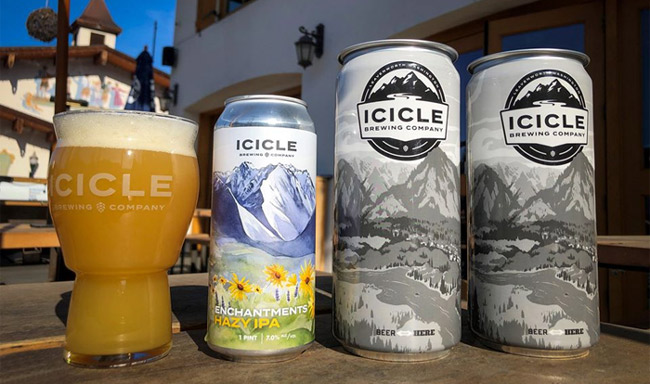 Not long after the shutdowns were enacted, Icicle Brewing Company in Leavenworth, WA announced that it was closing until the company figured some things out. Well, Icicle Brewing did that. Figure things out, I mean. Customers are now welcome to order beer online and pick it up at the taproom at designated times: Tuesdays and Fridays, basically. They kicked things off yesterday.

Yeah, a lot of breweries are doing this kind of stuff these days, but Icicle Brewing is not just selling beer, it is stepping up to support the community, donating 20 percent of proceeds from beer sales to a local non-profit. At a time when most breweries are fighting to stay alive, and are understandably placing their own needs at the top of the priority list, Icicle Brewing just can’t help itself. They are just that deeply ingrained in the local community.

It was a good day. The brewery’s local fans were able to get their hands on crowlers and cans of their favorite Icicle Brewing beers, including the brand new Enchantments Hazy IPA, but in doing so, they raised $660 for Community Foundation of NCW.

“Thanks to everyone who ordered to-go beer for our first Community Crowlers day,” the company said in a message on Facebook. “With your beer purchases, we raised $660 for Community Foundation of NCW! Our next pick-up time will be Tuesday from 3-6pm. You can order online now through 10pm, Monday night at https://icicle-brewing-company-llc.square.site/. We will again be donating 20% of all beer sales to Community Foundation of NCW. Thank you for your awesome support of Icicle Brewing and our community.”

Local voices talk about diversity, equity, and inclusion in the beer industry
Hello Brew Co! Love is... a beer to support the LGBTQ+ community
Beer release - a new IPA from Hale's Ale Brewery and another one coming soon